It is necessary to promote the leading role of State-owned enterprises (SOEs) in forming and expanding production, supply and value chains, stated Prime Minister Pham Minh Chinh during a working session with the Party Committee of the Central Enterprises Bloc (CEB) in Hanoi on July 12. 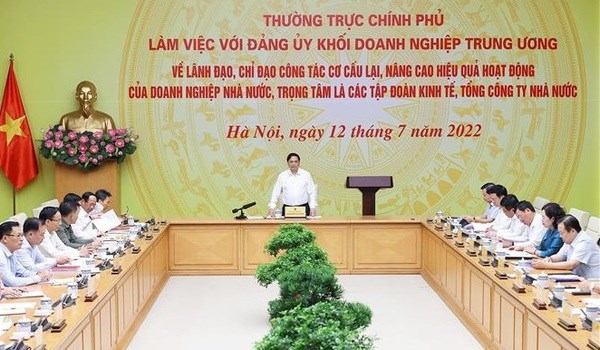 It is necessary to promote the leading role of State-owned enterprises (SOEs) in forming and expanding production, supply and value chains, stated Prime Minister Pham Minh Chinh during a working session with the Party Committee of the Central Enterprises Bloc (CEB) in Hanoi on July 12.

The PM described the SOEs as an important material force of the economy, and hailed the strong performance of the businesses, especially during COVID-19 period.

He affirmed that the Party Organisation of the CEB is the key force of the SOEs in their restructuring, especialy in optimising their resources at 9.93 quadrillion VND (424.63 billion USD).

Pointing to a number of current shortcomings of SOEs, PM Chinh asked the Party Committee of the CEB to continue to renovate Party leadership and principles while speeding up the restructuring, reshuffling and renovation of SOEs to develop the firms and enhance their efficiency, with an aim to basically finish the reorganising and ownership switching of SOEs in 2025, along with the settling of stagnant projects of State-owned economic groups, corporations and enterprises.

Along with completing institution and policies to deal with difficulties in SOE restructuring and managing the State capital at enterprises, it is crucial to strengthen the coordination and cooperation among SOEs and between them and their peers from other economic sectors, he said. 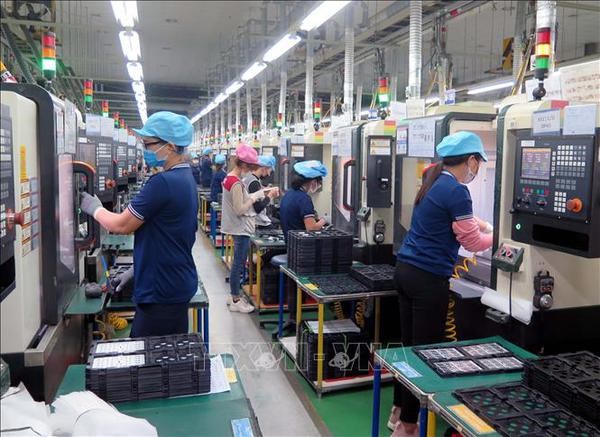 Underlining the significance of enhancing the efficiency of SOEs, the leader pointed to the need to complete the governance system and the improvement of capacity of management officials, as well as the prevention of law violations and interest conflicts.

At the same time, it is necessary to optimise resources in capital, land, trademark, tradition and history of the enterprises, while closely managing State capital and property in line with the law, he said.

The PM also stressed the significance of strengthening decentralisation and delegation of power. He expressed his hope that the Party Committee of the CEB will work closely with the Government in completing these targets, tasks and solutions, thus making full use of resources from SOEs to match their potential.

As of the end of 2021, the Party Organisation of the CEB had 1,148 local Party Organisations, 5,742 cells and 87,585 members. The bloc comprises nine economic groups, 20 corporations, six banks, one State-run financial institution and total of 930 affiliated enterprises./.

Prime Minister Pham Minh Chinh has demanded that people and enterprises must be the centre, key player, target, and momentum of administrative procedure reforms.

VCN – On September 12, in Da Nang, the General Department of Vietnam Customs held a workshop on implementing the pilot program for voluntary compliance with customs law for customs departments in the central region.

Clarifying shortcomings in the implementation of credit guarantees for SMEs

VCN – A workshop to review the establishment, management and operation of the Credit Guarantee Fund for small and medium-sized enterprises (SMEs) under Decree 34/2018/ND-CP was jointly held by the Department of Banking and Financial Institutions (Ministry of Finance) and the United States Agency for International Development (USAID) on the morning of September 12.