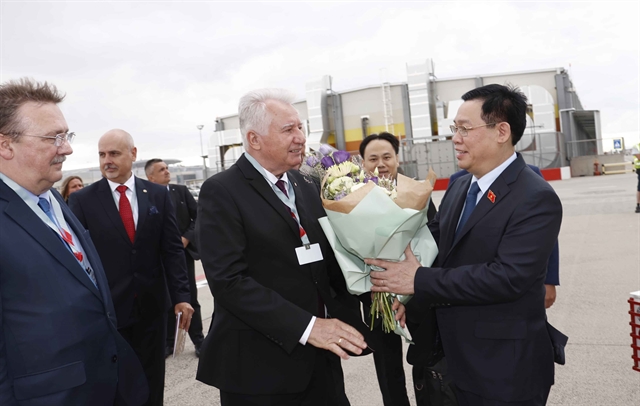 National Assembly Chairman Vương Đình Huệ and a high-level delegation from the Vietnamese legislature arrived at Liszt Ferenc Airport in Budapest, the capital of Hungary, in Saturday afternoon (local time), beginning an official visit at the invitation of the Speaker of the National Assembly of Hungary, László Kövér.

Huệ and the delegation were welcomed at the airport by Deputy Speaker of the Hungarian parliament István Jakab, Hungarian Ambassador to Việt Nam Ory Csaba, and Vietnamese Ambassador to Hungary Nguyễn Thị Bích Thảo, among others.

The visit of NA Chairman Huệ takes place amid good development of the Việt Nam-Hungary ties after the two countries elevated their relationship to a comprehensive partnership during the visit in 2018 of Việt Nam’s Party General Secretary Nguyễn Phú Trọng.

Hungary has been very active in pushing for the ratification of the EU-Việt Nam FTA. It was also the first among EU member states to ratify the EU-Việt Nam Investment Protection Agreement (EVIPA).

The two-way trade totalled US$1.1 billion last year with an improved balance of trade, despite the impacts of COVID-19.

Education-training is a traditional cooperation field between the two sides, with thousands of Vietnamese having received training in Hungary. The European nation has been the largest provider of scholarships for Vietnamese students among EU nations. It is taking necessary steps to establish a Hungarian cultural centre in Hà Nội.

It has been committed to providing Việt Nam with ODA loans worth 440 million euros (nearly US$465 million) for the implementation of a number of priority projects in Việt Nam.

The two parliaments have also maintained the exchange of high-ranking delegations, sharing of experience and exchanges between their committees and parliamentary friendship groups, along with close coordination at regional and international inter-parliamentary forums like AIPA, AIPA, IPU, APPF, ASEP or APF.

Talking to the press on the threshold of the trip, Hungarian Ambassador to Việt Nam Ory Csaba said it will contribute to fostering the Việt Nam-Hungary traditional relations and promise to bring practical benefits.

Parliamentary relations between the two countries are also a very important area of Hungarian diplomacy, the diplomat stated. In the past two years, despite the impact of the COVID-19 epidemic, the two NAs still virtually maintained their organisation of conferences and seminars for parliamentarians to exchange experiences, he said.

The visit demonstrates the political resolve of both sides to promote parliamentary cooperation, particularly in building and completing a legal corridor to facilitate stable and long-term operation for their investors and businesses and promote collaboration in multiple areas.

Regarding the community of about 5,000 Vietnamese expatriates in Hungary, the ambassador considered them an important and dynamic bridge that links the countries together.

The community lives and integrates well, and succeeds in all fields from science and culture to economy, he said, adding that they also have a very good relationship with the Hungarian authorities. — VNS

The National Assembly (NA) Standing Committee on Saturday morning gave opinions on the implementation and capital allocation for tasks and projects under the programme on socio-economic recovery and development.