Winners of the Vietnam Top 10 Reputation Award 2021 in the food and beverage industry were unveiled by the Vietnam Report JSC on October 20. 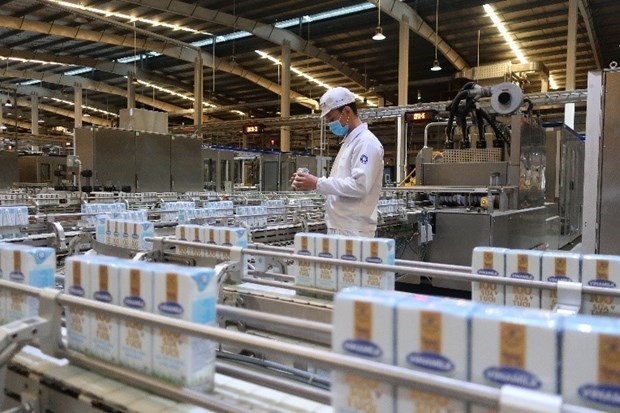 A factory of the Vietnam Dairy Products JSC (Vinamilk), one of the top 10 prestigious firms in milk and dairy product manufacturing (Photo: VNA)

Winners of the Vietnam Top 10 Reputation Award 2021 in the food and beverage industry were unveiled by the Vietnam Report JSC on October 20.

They include the lists of the 10 most prestigious food companies in terms of milk and dairy products; sugar, confectionery, and other nutritious foods; packaged food, spices, and cooking oil; and fresh and frozen food.

The lists of the top 10 beverage firms in terms of alcoholic and non-alcoholic drinks were also released.

The rankings were compiled basing on the businesses’ financial reports in the most recent year, their prestige on the media, and surveys of the companies and relevant sides such as consumers and experts conducted in August this year.

Vietnam Report said the country’s economy grew steadily, by 5.6 percent, in the first half of 2021 with positive and stable macro-economic indexes. However, the situation became worse in the third quarter, when the COVID-19 pandemic got complicated with the spread of the Delta variant, forcing the Government to take more drastic response measures.

As an important sector, the food and beverage industry has also been hit hard. Prolonged impacts of the pandemic have become clearer since the start of the fourth wave of COVID-19 infections in April, especially since July, severely affecting more than 91 percent of businesses in this sector.

Vu Dang Vinh, General Director of Vietnam Report, said most of enterprises have become more prudent, with 78 percent predicting more business difficulties in the remaining months, doubling the rate of 37 percent one year ago.

However, he added, up to 80 percent of food and beverage firms believed that the country will recover quickly after the pandemic. About 47 percent expect that it will take them about six months to recover, 33 percent others seven - 12 months, and 13 percent more than 12 months./.

VCN - Order 248 on "Regulations on registration for enterprises producing imported foreign food" and Order 249 on "Measures to manage import and export food safety" of China will take effect from January 1, 2022. The General Administration of Customs of China has just answered and clarified some key queries of these Orders.

Enterprises need to pay attention to comply with Orders 248, 249

VCN - Mr. Le Thanh Hoa, Director of SPS Vietnam Office, Deputy Director of the Department of Agricultural Products Processing and Market Development (MARD), said that in addition to adapting to China's Orders 248 and 249, manufacturing enterprises of agricultural and aquatic products also need to find out information about other export markets.

Over 84 percent of production firms in Can Tho resume operations

As many as 982 production enterprises in the Mekong Delta city of Can Tho had resumed their operations by November 11, or 84.08 percent of the total, up 674 businesses from mid-August, reported the municipal Department of Industry and Trade.