Unlike other financial services like banks and securities, insurance stocks haven’t recorded significant gains despite positive business results and a bright growth outlook.nbsp; 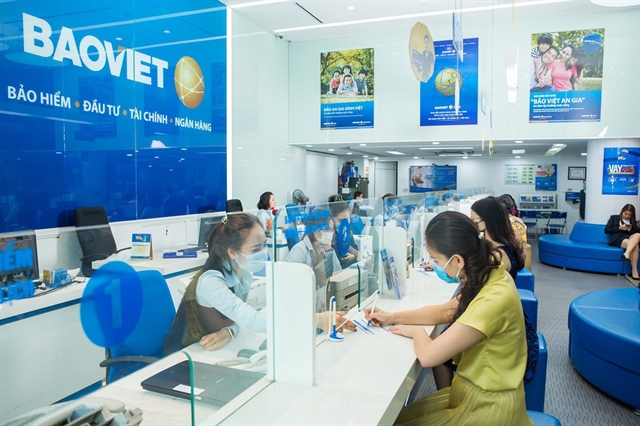 Unlike other financial services like banks and securities, insurance stocks haven’t recorded significant gains despite positive business results and a bright growth outlook.

The draft amended Law on Insurance Business is carried out with the aim to apply international experiences and boost the development of the Vietnamese market.

Việt Nam has high potential for insurance services, but the development pace is still low compared to the region and world. The amended Law on Insurance Business is expected to take effect from 2023.

In the first eight months of the year, the insurance market still recorded positive growth despite the pandemic. By the end of August, total assets in the insurance market were estimated at nearly VNĐ643.6 trillion (US$28.3 billion), up 22.1 per cent year-on-year, with total premium revenue during the period also rising nearly 17 per cent to more than VNĐ133 trillion.

Different from other industries that were affected by the COVID-19 pandemic, the insurance industry's profit growth in the first half of the year was quite strong.

On the stock market, the share prices of these listed insurers also grew well in the first months of the year. Accordingly, the market prices of five to nine insurance companies jumped 40 - 145 per cent, with VNR shares climbing 145 per cent, MIG shares up 66 per cent and PTI shares up 57 per cent.

Notably, all insurance stocks reported good performance in the past two months. Some stocks have started gaining since the end of June or the beginning of July like MIG, BMI, PVI and PGI shares, or from August like BIC shares.

BVH was the only stock that posted losses compared to the beginning of the year, but has recovered from the bottom since mid-July.

However, the insurance group's profit growth still lags behind that of other financial sectors like banks or securities. The strongest growth of the groups’ share prices since the beginning of the year was only 145 per cent, while there were many bank and securities stocks that climbed by even 4-5 times.

In general, the total capitalisation of the insurance industry has only increased by 2.8 per cent since the beginning of the year, largely due to the losses of nearly 20 per cent of BVH shares.

The capitalisation of the insurance group on the stock market occupies a very small proportion, just over 1 per cent of the total market capitalisation, meaning there is more room for growth among insurance stocks in the future.

Financial indicators of insurance stocks show that the industry has more potential to grow as more than half of these nine firms have price per earning ratio (P/E) of less than 15x and average price to book value ratio (P/B) of 1.5-1.7x.

The complicated developments of the COVID-19 pandemic are creating short-term risks for insurance companies as they are faced with falls in customer income, the risk of inflation and an increase in compensation.

However, Bảo Việt Securities Company (BVSC) said that in the short term, insurance stock prices would still receive momentum from the state capital disinvestment plan. In 2021, a number of businesses plan to pest part of their capital such as BMI, PTI, BVH, and MIG.

Moreover, Việt Nam is always in the top countries with the highest growth rate of premium revenue in the world, with an average annual growth of over 9.3 per cent.

BVSC believes that once the COVID-19 pandemic is over, the non-life insurance industry will quickly return to the previous average growth of 15 per cent, while life insurance will still maintain high growth of 25-30 per cent/year. — VNS

VCN – The General Department of Vietnam Customs (GDVC) has agreed with the proposal of the Vietnam National Coal-Mineral Industries Group on the pilot implementation of pre-authorized e-tax payment program with commercial banks authorized by the group for tax payment.

VCN - According to banking and finance expert Dr. Nguyen Tri Hieu, consumer loans are increasing, but are more risky than corporate loans, so it is necessary to develop a form of consumer debt trading to help banks avoid increasing bad debts.