After the proposal to cut the petrol price stabilisation fund and import tax, the Ministry of Finance (MoF) has announced plans to cutnbsp;the environmental tax on fuel. nbsp; 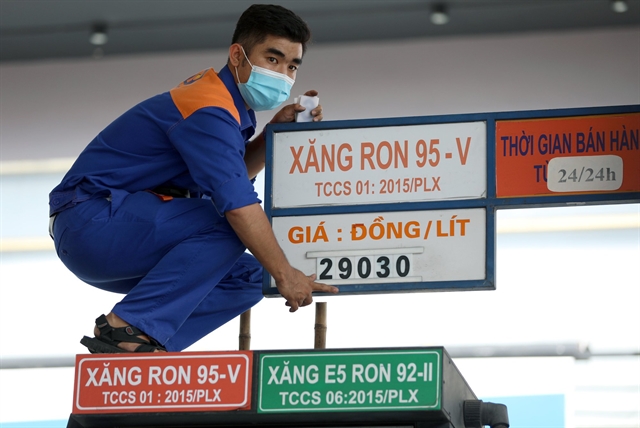 After the proposal to cut the petrol price stabilisation fund and import tax, the Ministry of Finance (MoF) has announced plans to cut the environmental tax on fuel.

gasoline prices have increased six consecutive times in nearly two months, the proposal for further measures would be submitted to the National Assembly for consideration, said Deputy Minister of Finance Nguyễn Đức Chi.

As retail petrol prices increased from 3pm Monday, June 13, to the highest rate ever, marking the sixth consecutive rise, a Grab driver from Nam Định Province told Việt Nam News: “I have not yet recovered from the pandemic, now the heat of the summer, the sudden rain and increased petrol prices are making me so exhausted.”

Nguyễn Văn Thông, 53, has to work more than 15 hours a day to earn a living and raise his children in a rented house in the capital city. He said: “I can't stop working or my children will go hungry, but the higher price of petrol has caused lots of difficulties.”

Under the decision by the Ministry of Industry and Trade and the Ministry of Finance, the retail prices of E5 RON 92 and E5 RON 95 petrol increased by VNĐ880 and VNĐ800 per litre to VNĐ31,110 and VNĐ32,370 per litre, respectively.

This was the sixth consecutive price hike in petrol prices since April 21 with total increases amounting to VNĐ5,060 and VNĐ4,640 per litre for RON95 and E5 RON 92, respectively.

Grab bike driver Nguyễn Văn Thông said: “The petrol price hike has meant price rises for many other goods and necessities,” adding that he had not received a respective increase in his income.

Thông said many of his colleagues had quit as they felt it was not worth it, but as the main breadwinner in the family, Thông has to keep working.

According to calculations, each litre of RON95-III gasoline costs VNĐ32,370, including the import price to the port of VNĐ22,389, 10 per cent import tax, 10 per cent special consumption tax and 10 per cent value-added tax, as well as VNĐ2,000 of environmental protection tax. Thus, with the above four taxes, consumers have to pay more than VNĐ9,400, equivalent to more than 29 per cent.

An insider told local media that with business expenses, the total taxes and fees charged on a litre of gasoline account for more than 34 per cent, adding: “If buying VNĐ100,000 of gasoline, consumers have to bear more than VNĐ34,000 of taxes and fees. If the excise tax is removed and the collection of value-added tax and import tax is temporarily suspended, the price of gasoline could be reduced from more than VNĐ32,000 to about VNĐ23,000 per litre.”

Thông, the Grab driver, told Việt Nam News: “I hope the ministry can do it as soon as possible.”

According to data by MoF, currently, each litre of petrol and oil of all kinds has to bear tax of VNĐ300 to VNĐ2,000 from April 1 to the end of December 2022 after the reduction of half of the environmental protection tax from VNĐ3,000 to VNĐ4,000 before that, according to Resolution 18.

If the further cut in environmental protection tax is approved by the NA, each litre of gasoline will be reduced by another VNĐ2,000, which could ease the impact of increasing gasoline prices on the economy.

Thanks to such action, the CPI in the first five months of the year rose 2.25 per cent, a slight increase compared to 1.3 per cent in the same period last year, said an MoF representative.

However, in the last six months of the year, gasoline prices increased continuously, and many countries and territories such as the US, EU, Japan and Korea faced problems with high gasoline prices, causing economic instability, he said.

Local statistics said the tax costs related to the composition of gasoline prices in Việt Nam were quite large, ranging from 30 to 45 per cent of petrol prices, including import tax, special consumption, VAT, and business expenses. — VNS

The Ministry of Industry and Trade (MoIT) has forecast that domestic consumption demand will recover and grow thanks to high vaccination coverage and the reopening of the tourism sector.

Vietnam's taxes on petrol and oil are low: Deputy Minister of Finance

VCN - According to Deputy Minister of Finance Ta Anh Tuan, in Vietnam after the policy on tax reduction is applied, taxes account for 29-31% in petrol prices and 13.3% in diesel oil prices