A year after Japan first opened its market to Vietnamese lychees, the export and consumption of the fruit have been going smoothly despite COVID-19, Vietnam’s trade office in the Northeast Asian country said. 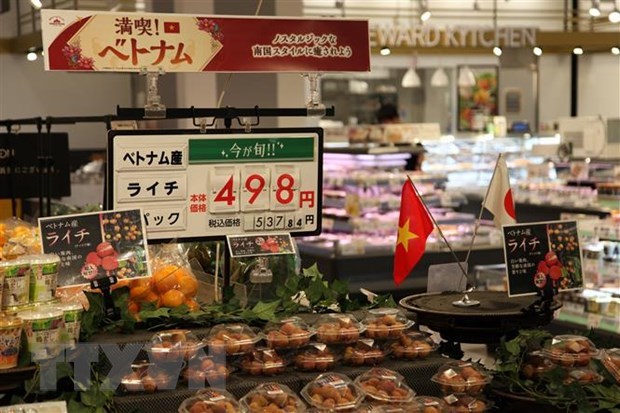 A year after Japan first opened its market to Vietnamese lychees, the export and consumption of the fruit have been going smoothly despite COVID-19, Vietnam’s trade office in the Northeast Asian country said.

Ta Duc Minh, Trade Counsellor of Vietnam in Japan, said that due to the impact of the pandemic, Japan’s Ministry of Agriculture, Forestry and Fisheries (MAFF) didn’t send experts to monitor lychee packaging and sterilisation this year but instead authorised Vietnam’s plant quarantine agency to do so.

This helped save time and cost in preparing the lychees for export, creating better conditions for the fruit to enter Japan, he noted.

The first batch of Vietnamese lychees, under a contract signed between Japan’s Sunrise Farm and the Ameii Vietnam JSC, arrived in Japan on May 23.

Vietnamese exporters plan to ship about 1,000 tonnes of fresh lychees, which are now in season, to Japan this year, Minh said, attributing that outcome partly to the trade office’s early implementation of promotional activities in Tokyo and many other localities around the country.

The trade office is continuing to coordinate with relevant agencies in Vietnam and distribution networks in Japan to step up these efforts, helping the fruit become more popular among Japanese consumers, the Trade Counsellor added.

Vietnam began negotiating lychee exports to Japan in 2014. After five years, on December 15, 2019, the MAFF announced that Japan had officially opened its market to Vietnamese lychees but also requested that the fruit undergo a strict plant quarantine process prior to export.

In early June 2020, an agricultural expert from Japan was sent to Vietnam to monitor fruit packaging and sterilisation, completing the final step required by Japan for lychees to be shipped to the market./.