Textile, garment and footwear industries are stillnbsp;facing many difficulties due the COVID-19 pandemic, and unable to recover production and businessnbsp;in the short term. 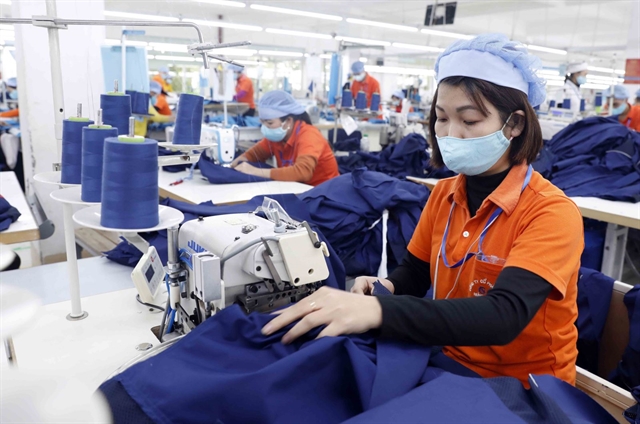 Many garment enterprises have found solutions to maintain production in the context of COVID-19 pandemic. VNA/VNS Photo Trần Việt

Textile, garment and footwear industries are still facing many difficulties due the COVID-19 pandemic, and unable to recover production and business in the short term.

These are large industries that have contributed large parts to the national export value and provided jobs for many workers.

However, many localities are implementing pandemic preventive measures, especially in southern cities and provinces where enterprises are suffering serious impact from the pandemic on production.

A large textile and garment enterprise with about 5,000 employees has had to suspend production for a month. However, it still has to pay VNĐ17.5 billion per month in depreciation expenses, insurance premiums for employees, bank loan interest and COVID-19 testing of employees. This figure includes air freight for urgent orders and salaries of employees though workers stay at home.

Meanwhile, a footwear enterprise with about 9,000 employees has spent US$1 million to implement anti-pandemic measures. It has also faced increased input costs of 5-10 per cent.

However, garment and footwear enterprises said the highest cost was still fines for late delivery. If the delivery of products is delayed, besides higher transport costs by plane, they could be fined hundreds of billions of đồng. Along with that, they would not be able to receive orders for the next season.

In order to keep orders for production next year, Phan Thị Thanh Xuân, general secretary of the Việt Nam Leather, Footwear and Handbag Association, said many enterprises had found solutions to maintain production and ensure delivery.

The association proposed a gradual recovery of production for the footwear industry. Initially, enterprises would resume about 30 per cent of capacity. Then, they would continue to gradually increase production capacity to 50-70 per cent.

Xuân said the industry’s prospect was not positive until year end and possibly next year. Now, many enterprises were facing difficulties and could not continue production or meet set targets in production and business.

Vũ Đức Giang, chairman of the Việt Nam Textile and Apparel Association, said that if the pandemic continued complicated development, textile, garment and footwear enterprises would be unable to maintain production and keep customers. This was a huge challenge for the textile, leather and footwear industries.

"Besides that, workers at enterprises have also left large production centres in the south such as HCM City, Bình Dương and Đồng Nai, to avoid the pandemic, causing enterprises to have a serious labour shortage," Giang said.

According to the Việt Nam National Textile and Garment Group, an important issue is to ensure human resources in the context of changed production plans, shortages of COVID-19 vaccines and an unpredictable pandemic.

The Ministry of Industry and Trade said the industrial production index of the whole industry in August was estimated to decrease by 4.2 per cent month on month and 7.4 per cent year on year. Export turnover decreased by 9.2 per cent for textiles and garments and 38.5 per cent for footwear year on year.

It was difficult to make an accurate forecast about the prospects of the textile and garment industry in the short and medium term because the pandemic was still complicated in Việt Nam, affecting the production of enterprises and psychology of workers.

The ministry said the COVID-19 pandemic was prolonged, affecting most industries and localities as well as the target growth of all sectors. Due to the pandemic, many manufacturing and exporting enterprises must delay or cancel orders, leading to risks of losing markets and changing supply chains.

Along with that, import and export activities might still face many difficulties due to the complicated development of the pandemic that would force HCM City and southern provinces to prolong the social distancing period. This would cause many challenges in production, transport and logistics, the ministry said.

In order to restore production of the textile, garment and footwear industries, the ministry would focus on removing difficulties and providing support for factories to maintain and restore production. Initially, solutions would aim at completing signed export contracts and attracting more orders for the year-end shopping season in the European and US markets.

In addition, the ministry would accelerate the building and implementation of the development strategy for the garment, textile and footwear industries to 2030, with a vision to 2035. It would also build a programme on sustainable development of those industries until 2030.

At the same time, it would give support in training human resources, applying technology in production design, and developing the textile and dyeing industry.

Vietnamese firms operating in supporting industries have been developing in recent years, as products have partly met demand in the domestic market and for export.

Over 50% of raw materials and accessories for textiles, leather, and footwear imported from China

VCN - China is Vietnam's largest trading partner and import market. Many raw materials, accessories, and components of major domestic production and export industries are mainly imported from this neighboring country.

VCN - Most leather and footwear businesses in the South have closed for more than a month; partners have gradually moved orders to other countries. Leather and footwear enterprises wish to have a set of production criteria for safe production during the pandemic; electricity price reduction; and a halt to collecting port fees.