Minister of Foreign Affairs Bui Thanh Son has highlighted the six priorities the diplomatic sector will focus on in 2023, during a recent interview granted to the press. 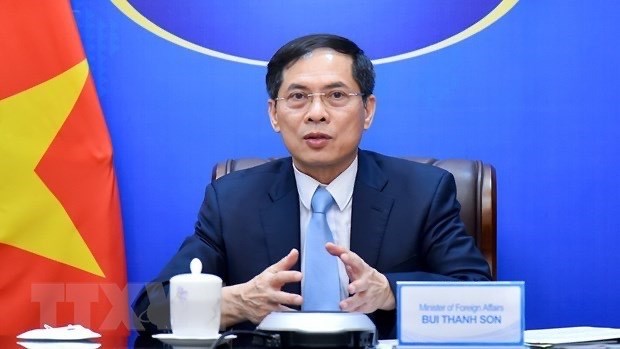 Minister of Foreign Affairs Bui Thanh Son has highlighted the six priorities the diplomatic sector will focus on in 2023, during a recent interview granted to the press.

He pointed out that complex and unpredictable developments in the world economy in 2023 will pose more latent difficulties and challenges than last year. Meanwhile, Vietnam is pushing ahead with realising the development targets set at the 13th National Party Congress and the socio-economic development plans for 2021 - 2025.

Given this, the diplomatic sector will apply itself to implementing six priorities, he said.

First, the sector will continue consolidating a stable, peaceful, and favourable external environment for development; enhance relations with neighbouring countries, powers, strategic and comprehensive partners, traditional friends, and other important partners in a substantive manner to promote political trust and common interests; step up and elevate multilateral diplomacy, active, comprehensive and intensive integration into the world, and raise Vietnam’s role in the building and shaping of multilateral institutions; actively engage in the Association of Southeast Asian Nations (ASEAN), the Mekong sub-region, and the United Nations; effectively make use of development initiatives and actively take part in the building of new rule and standard frameworks; boost diplomacy to serve digital transformation, green transition, and climate change response; proactively, flexibly, and effectively respond to new connectivity initiatives in the region.

It will help locate Vietnam in the shift of global supply chains and green transition so as to make preparations for seizing and optimising new development trends; capitalise on other countries’ assistance in sustainable agricultural restructuring, supply chain shifting, digital transformation, and energy transition; and effectively make use of the signed free trade agreements, especially the Comprehensive and Progressive Agreement for Trans-Pacific Partnership (CPTPP), the EU - Vietnam Free Trade Agreement (EVFTA), and the Regional Comprehensive Economic Partnership (RCEP).

Third, the sector will strengthen the coordination of diplomacy with defence and security by grasping the East Sea and land border situation, proactively promoting cooperation with relevant countries, opportunely proposing the fight against and effectively preventing any violation of Vietnam’s sovereignty, territory, sovereign rights, and legitimate interests; stepping up the negotiations on an efficient and effective code of conduct (COC) in the East Sea that matches international law, including the 1982 UN Convention on the Law of the Sea (UNCLOS); and proactively, flexibly, and opportunely refuting propaganda and distortions with sabotage and incitement purposes by hostile and reactionary forces, the official noted.

Fourth, modern and comprehensive diplomacy will be promoted, with the coordination among the Party, State, National Assembly, and people’s diplomacy to be enhanced. The sector will work to ensure the Party’s consistent leadership, the State’s concentrated management, and the close and concerted coordination among all pillars and forces engaging in external affairs.

Fifth, the sector will also bring into play the role of diplomacy in protecting the Fatherland early and from afar; increase studying, forecasting, and proposing diplomatic strategies, especially for issues with direct and long-term impacts on national security and development; and press on with implementing the major plans and strategies on diplomacy, security, and defence. And

Last but not least is to build a contingent of comprehensive diplomats in terms of politics, thought, morality, mettle, and wisdom with a modern and professional working style and creativity. Special attention will be paid to the Party building and rectification and personnel affairs; the development of regional- and international-level experts; the consolidation of a lean, scientific, and efficient apparatus for the sector; and the acceleration of modernisation and digital transformation, according to the minister./.