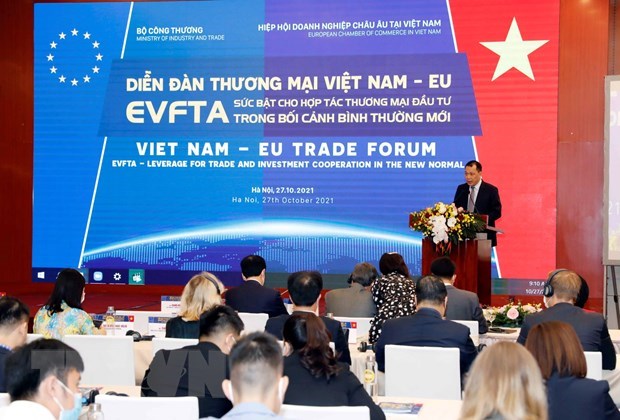 The report said firms viewed the current “new normal” and less severe Omicron variant as manageable, which has allowed businesses to resume faster after a gloomy 2021, resulting in an increasing BCI in Q1 this year.

The BCI is expected to sustain this improving trend in Q2, with members more optimistic about the business outlook.

"Generally, business leaders are steadily improving their attitudes towards the future growth of the Vietnamese economy. While more than two-thirds of them believe in the likelihood of a thriving economy in the next three months, only 5 percent of business leaders expect future economic declines," said the report.

Leaders are more buoyant with the current improving scenario as business perceptions are recovered according to the economy’s pace. As 2022 begins, a brighter future is expected, as operations are entirely back to the new normal in significant hubs of the country.

In addition, the EU-Vietnam Free Trade Agreement (EVFTA) is expected to boost trade and investment on both sides and help the Southeast Asian economy further integrate into the global economy and the international community.

The EVFTA will eliminate almost all tariffs between the EU and Vietnam. It removed tariffs on 65 percent of the value of EU exports the moment the FTA entered into force, with the remaining tariffs being phased out over the following decade.

Meanwhile, 71 percent of EU imports from Vietnam became tariff-free once the EVFTA entered into force. This will rise to more than 99 percent over the following 7 years.

Meanwhile, customs duties will be almost eliminated over a transitional period of 7 years for Vietnamese goods and 10 years for EU goods. This will be a ‘win-win’ for businesses and consumers in the form of lower prices and greater competitiveness.

According to EuroCham, 72 percent of business leaders have a concrete understanding of the EVFTA and its implications, and almost half believe it is relevant to their business.

More importantly, about 6 percent of European business leaders in Vietnam believe that EVFTA has already benefited their businesses.

The Business Climate Index is a regular barometer of the business sentiment among European companies operating in Vietnam.

Because of the active participation of EuroCham members in this survey since 2013, the BCI is seen by decision-makers, media, and business professionals in Vietnam as a key indicator of economic activity in the country./.