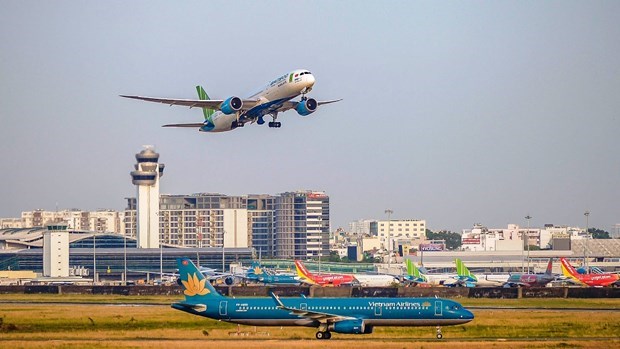 The national flag carrier Vietnam Airlines and Bamboo Airways are rushing to complete procedures to secure permits from US competent agencies to operate regular direct flights to the US.

To date, no Vietnamese airlines have been licensed by the Transportation Security Administration (TSA) and the Federal Aviation Administration (FAA) to conduct regular direct flights to the US. Currently, Vietnam Airlines and Bamboo Airways are racing to become the first Vietnamese carrier to establish a direct route to the US, with no more than 12 charter flights each year.

According to Vietnam Airlines, in early 2000, the carrier opened a representative office in San Francisco to build a sales system and access local customers.

It has also begun to cooperate with a number of US airlines such as American Airlines and Delta Air Lines to expand its market accessibility.

At the same time, Vietnam Airlines has worked to improve security and safety standards as well as service quality, and coordinated with domestic and foreign agencies and partners to complete necessary procedures.

For regular flights, various permits are needed from US competent agencies like the TSA, the FAA, the Department of Transport, the US Customs and Border Protection (CBP), the International Revenue Service (IRS), the Animal and Plant Health Inspection Service (APHIS), the National Transport Safety Board (NTBS), authorities of San Francisco airport and business administration agencies of states of the US.

The TSA is one of the highest mountains to surmount with its stringent requirements. It will send experts to examine airports in Vietnam before proceeding further. The FAA will base itself on the TSA’s approval to grant liscence to Vietnamese airlines.

Vietnam Airlines has completed all the documents and preparations for the TSA’s ratification.

There are currently no direct routes between the two countries, and passengers have to transit through Hong Kong, the Republic of Korea (RoK) or Taiwan, spending about 20 hours in all, while a direct flight would shorten the travel time to 15-16 hours.

An official from the Civil Aviation Authority of Vietnam said the current fleets of Vietnam Airlines and Bamboo Airways with their Boeing 787-9 and the Airbus 350 won’t be able to fly directly to the US at full capacity (over 300 seats).

For long-haul and direct flights, the Boeing 777x and Airbus A350-1000 are needed, but the two carries do not have such jets, he said.

Vietnam Airlines CEO Le Hong Ha said the carrier might have to bear an annual loss of 30-50 million USD in the first five years of operating direct Vietnam-US flights.

American carriers have faced the challenges that Vietnamese carriers are facing now, and stopped direct flights between the two countries long ago. United Airlines launched a direct service in 2007 but pulled the plug on it in 2012, while Delta Air Lines flew its direct service for a mere six months in 2008. No American carriers have launched a direct flight since.

According to Dang Tat Thang, General Director of Bamboo Airways, if conditions permit, there will be three direct flights between Vietnam and the US per week, starting 2022, and 5-7 flights each week later, depending on market demand.

Israel's removal of import quotas and opening of its dairy market create a good opportunity for Vietnamese businesses to approach Israeli importers and boost exports to the country in the near future, the Vietnamese trade office in Israel has said.

Vietnam-US economic and trade ties have reaped great achievements, contributing to practically deepening the comprehensive partnership between the two countries, heard a forum in Hanoi on December 7.