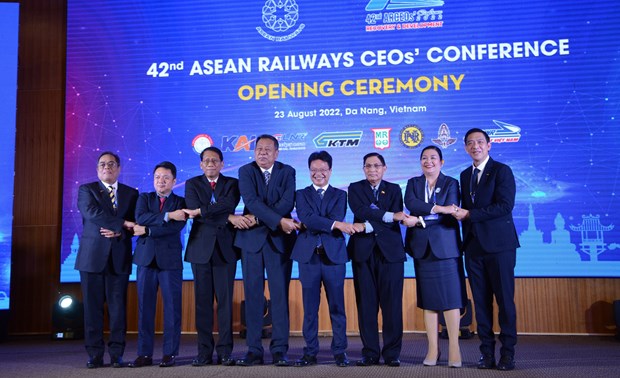 Officials from the railway industry in eight ASEAN countries pose for group photo at the event. (Photo: VNA)

As many as 170 delegates and observers from the industry in eight ASEAN countries, namely Cambodia, Indonesia, Laos, Malaysia, Myanmar, the Philippines, Thailand, and Vietnam, are participating in the three-day event.

Developing rail freight services is not only a temporary solution during the pandemic but also a long-term orientation of Vietnam's railway industry, he said, adding that it will contribute to promoting trade and socio-economic development between countries in the region and the world.

According to Manh, the corporation has been tasked with finalising solutions for the implementation of the railway development plan for the 2021-2030 period, with a vision to 2050, aiming to effectively exploit existing railway lines and connect with international ones.

Priority will be given to building new rail lines that link with international gateway ports, especially in Hai Phong city and Ba Ria-Vung Tau province, as well as with those of Laos and Cambodia.

Within the framework of the event, the delegates will visit Da Nang station to learn about the VNR’s operation and Hoi An ancient town to learn about Vietnamese culture, country and people.

The 42nd ASEAN Railway CEOs’ Conference is an annual and rotary activity hosted by railway sectors of ASEAN countries. It offers an opportunity for international organisations, regional and world's leading manufacturers and suppliers of railway equipment to seek cooperation opportunities and represent the latest technologies in the field./.

Prime Minister Pham Minh Chinh joined leaders of other ASEAN countries and partners at the 25th ASEAN+3 (China, the Republic of Korea, Japan) Summit and other summits with India and Australia in Phnom Penh on November 12.

Amidst the regional and global economic slowdown, the ASEAN needs to strongly open its markets, remove trade barriers, and work together to create new growth engines to catch up with current major transition trend, stated Prime Minister Pham Minh Chinh at the 40th ASEAN Summit in Phnom Penh on November 11.

Prime Minister Pham Minh Chinh pledged further support to Cambodia’s efforts in building a strong ASEAN Community, as he joined other ASEAN leaders at a November 10 reception held by Cambodian King Norodom Sihamoni as part of the 40th and 41st ASEAN Summits and related summits in Phnom Penh.