Credit growth of banking system expands by over 17 per cent

Credit of the Vietnamese banking system as of June 9 surged by 17.09 per cent against the same period last year. 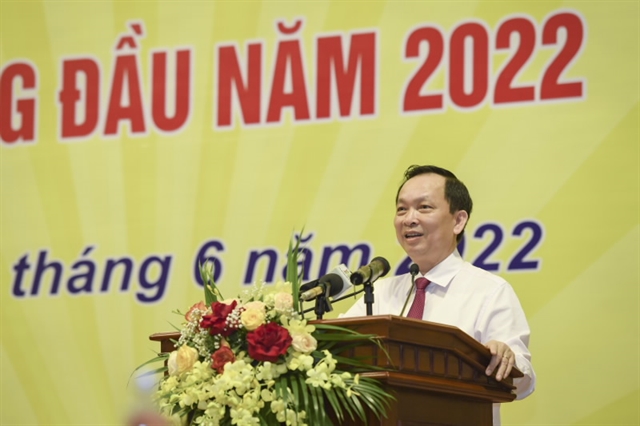 Credit of the Vietnamese banking system as of June 9 surged by 17.09 per cent against the same period last year, deputy governor of the State Bank of Vietnam (SBV) Đào Minh Tú said.

Compared with the end of last year, the credit rose by 8.15 per cent.

He revealed the figures at a press conference held by the central bank to review the performance of the banking sector in the first six months of this year, adding that the surge was in line with the more positive developments of the country’s economy.

According to Tú, during the period, credit and monetary policies have gradually been harmonised with the new normal, focusing on increasing investment in various fields of the economy. Since the beginning of this year, the SBV has directed institutions to concentrate credit on business and production, and prioritised fields as well as strictly controlling credit for potential risk areas.

Positive credit growth along with the impact of the economic stimulus package will support the nation's economic recovery, he said in a meeting on Wednesday.

By the end of April, credit institutions have extended the payment deadline and reduced interest rates for debts worth more than VNĐ695 trillion (US$29.8 billion) for 1.1 million customers. Banks have also frozen and waived interest rates for about 490,000 clients with combined outstanding loans of nearly VNĐ91 trillion.

In the first half of 2022, the SBV has also managed the exchange rate flexibly in accordance with the development of domestic and foreign markets as well as macro balances, which therefore contributed to recovering the country’s economic growth and stabilising inflation.

However, Việt Nam is likely to face the risk of inflation in the future, Tú noted, adding the global monetary and financial situation has many uncertainties that will affect the country as its economy is deeply integrated internationally.

Prices of domestic commodities and petroleum have also increased recently due to geopolitical uncertainties around the world, which will have direct impacts on the management of exchange rates, interest rates and money supply.

"We have so far considered and assessed the impacts, and even mapped out measures to readily deal with greater disadvantages in the near future,” Tú said.

Currently, the country’s macro economy is still stable with inflation rising 2.25 per cent at the end of May. The Vietnamese đồng is also stable and the capital flow is positive.

Tú said the SBV will monitor market developments at home and abroad as well as the pandemic situation to synchronously and flexibly manage monetary policies to control inflation, stabilise the macro-economy and support economic recovery. — VNS

The banking industry may have a hard time reaching its 2022 profit growth targets, but share valuation have dropped significantly to attractive prices.

Việt Nam’s merger and acquisitions (MA) market in 2022 is forecast to include big deals worth billions of dollars in the banking industry.

VCN - Green credit is becoming an important component in credit activities of banks. The fact that banks are increasingly interested in and focusing on deploying this capital helps expand opportunities to access green credit for enterprises.