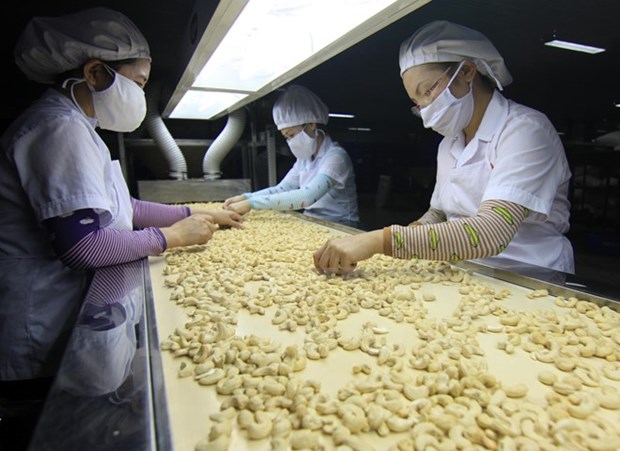 Although the turnover decreased, the average export price increased by 1.45% compared to the same period in 2021, reaching about 5,792 USD per tonne.

According to VINACAS, the cashew industry is facing many difficulties due to an unfavorable world market.

Exports for the whole year are likely to be lower than in 2021, it said.

During the reviewed period, Vietnamese cashew businesses imported about 968,000 tonnes of raw cashew nuts with a total value of nearly 1.4 billion USD, down 35.24% in volume and 37.84% in value.

However, the price of raw cashew imported from Africa increased by 15-20 percent this year compared to the same period last year.

The cashew crop this year came later due to the effects of climate change. There were also signs of pests and diseases in major cashew growing areas.

The price of raw cashew nuts and the cost for processing are high, making it difficult for processing factories to break even, said Tran Van Hiep, Vice Chairman of VINACAS.

According to Hiep, the Russia-Ukraine conflict and global inflation are affecting Vietnam's exports of cashew nuts.

Last year, Russia was the 11th largest importer of Vietnamese cashew nuts with an export value of nearly 62 million USD. Since the Russia-Ukrainia conflict occurred, exports to Russia have faced payment difficulties.

Increasing inflation in many countries, along with the zero-COVID policy of China - one of Vietnam's major export markets – have also adversely affected the export of cashew nuts and other agricultural products from Vietnam, experts said.

Exports in 2022 are forecast to face more difficulties due to high shipping costs, they noted.

However, in the current context, VINACAS has proposed to adjust the goal to 3.2 billion USD, down 400 million USD compared to 2021./.

The demand for IT personnel continues to soar given a rising recruitment need seen across many sectors serving post-pandemic business recovery and growth, according to a report on the Vietnamese labour market in the 2nd quarter by the payroll, recruitment & outsourcing agency Andeco Vietnam.

VCN - Cashew nut exports since the beginning of the year have faced many difficulties, leading to a decrease in export turnover. Commenting that the situation in the second half of the year will not improve, the cashew industry has proposed to lower the export target for the whole year to US$3.2 billion instead of US$3.8 billion as originally set.

VCN – The spontaneous development of cashew businesses has caused many difficulties for the customs authority in the management of raw cashew imports for export production.