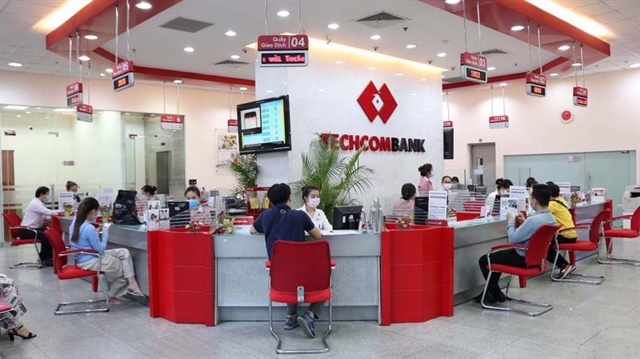 A view of a Techcombank’s office in Hà Nội. Techcombank had the lowest bad debt ratio of 0.67 per cent in the banking system by the end of Q1 2022. — Photo courtesy of the bank

In a recent report, analysts at VNDirect Securities Company said the asset quality of banks has been somewhat affected due to impacts of the COVID-19 pandemic, of which the average non-performing loan ratio (NPL) in the first quarter of 2022 increased while the loan loss reserve (LLR) ratio decreased slightly compared to the end of the fourth quarter of 2021.

The increase in bad debt in the coming months is also noteworthy when Circular 14, which allows banks to reschedule the payment time of COVID-19 affected debts, will expire at the end of June 2022. According to the SBV, if including the rescheduled debts and those sold to the Vietnam Asset Management Company (VAMC), the bad debt ratio of the banking system could reach up to 7.3 per cent, equivalent to that in the 2016-17 period.

However, VNDirect Securities Company’s analysts believe banks will be able to minimise the risk of a bad debt increase in the near future thanks to their solid asset quality and strong provision buffers.

The analysts explained the asset quality of banks has improved strongly compared to the 2016-17 period as banks have made high provisions for risky debts to avoid a bad debt increase. The LLR at most banks also hit an all-time high by the end of 2021.

In addition, an increase in capital adequacy ratio (CAR) has also helped banks improve their asset quality. The capital hike will continue to be the top priority goal of many banks in the remaining months of 2022, especially State-owned banks, to prepare for the application of international banking safety standards Basel III.

The banking industry will also benefit from the country’s strong export growth, recovery in demand and support from fiscal policies in 2022, the analysts said.

The analysts estimated although net profit margin is unlikely to improve due to higher deposit rates, banks will still record high profit growth of 29 per cent and return on equity (ROE) of 22 per cent in 2022 based on high credit growth, stable service fees and well-controlled credit costs.

State-owned banks can further increase the current account savings accounts (CASA) to lower their funding costs thanks to a reduction in money transfer and account management fees to attract more customers.

The local banking sector, currently undergoing drastic restructuring, will have more opportunities to improve its financial capacity as well as learn modern business models and management from UK partners after the UK-Vietnam Free Trade Agreement (UKEVFTA) takes effect, according to banking insiders.

VCN - Dr. Nguyen Tri Hieu, a banking and finance expert shared with Customs Magazine about meeting the capital needs of businesses in the context that the economy is facing inflation.