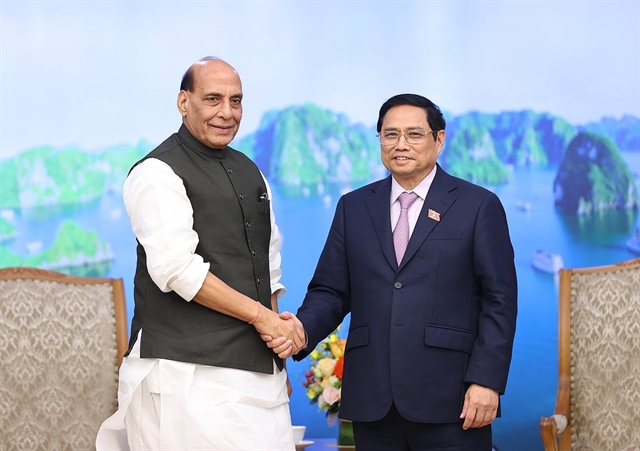 The sides have made unremitting efforts to strengthen bilateral cooperation on the basis of trust, sincerity and responsibility and in a practical, effective and appropriate manner in contribution to building the nations’ strong armies and protecting their sovereignty and territorial integrity, PM Chính said.

He affirmed that the Vietnamese Party, State, Government, and people always value and want to foster the country’s traditional friendship and strategic partnership with India based on the sides’ connections in history and culture, similar values and benefits, strategic trust and mutual understanding, and commitments to international law.

In the coming time, the two countries should continue to coordinate well in organising activities in celebration of the 50th anniversary of the establishment of diplomatic relations; and to effectively implement their signed cooperation agreements and documents, Chính noted.

He said he appreciates India's role at international and regional forums, as well as the strong coordination and support shared between the two countries, especially at the United Nations and the Non-Aligned Movement.

He said Việt Nam hopes that India, as a major power in the region, will take practical initiatives and actions to promote the solidarity and centrality of ASEAN in the regional security architecture, as well as the effective implementation of the 1982 United Nations Convention on the Law of the Sea (UNCLOS).

The Government leader stated Việt Nam and India need to actively support and participate in multilateral activities organised by each side, especially those within the framework of the ASEAN Defence Ministers’ Meeting Plus and activities between ASEAN and India.

The Government of Việt Nam will create the most favourable conditions for the defence ministries and militaries of the two countries to increase exchanges, improve understanding, strengthen mutual trust, and cooperate together for mutual benefits, he stressed.

For his part, Rajnath Singh agreed with his host’s recommendations, particularly regarding the effective implementation of the Joint Vision Statement on India-Việt Nam Defence Partnership towards 2030 and a memorandum of understanding on mutual support in logistics between the two defence ministries, both freshly signed.

He said he supports the practical and effective realisation of the UNCLOS in contribution to creating an environment of peace, stability, cooperation and development in the region and the world.

Chính took the occasion to send his invitation to Indian PM Narendra Modi to visit Việt Nam at a proper time.

The Government has approved a project on designating September 8 as the Day for Honouring Vietnamese Language in Vietnamese Communities Abroad. Chairman of the State Committee for Overseas Vietnamese Affairs (COVA) and Deputy Foreign Minister Pham Quang Hieu talked to the press about the goals of the project and reasons to choose the date.

Representatives of the Ministry of Foreign Affairs (MoFA) and the Ministry of Public Security (MPS) recently met with the embassies of Germany, the Czech Republic and Spain and asked them to coordinate with Vietnam to tackle difficulties regarding granting visas in the new version of Vietnam’s passports, according to the MoFA.