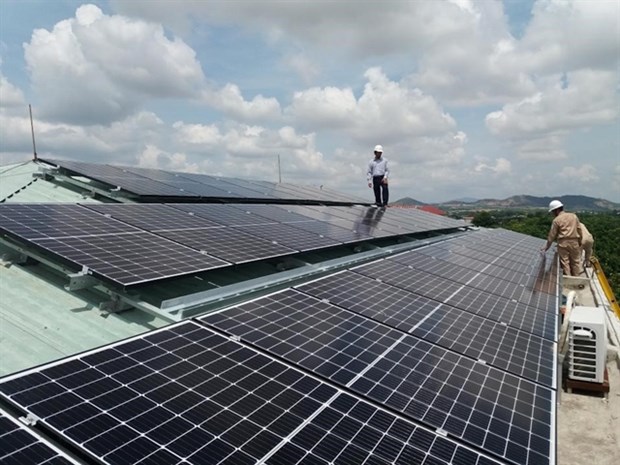 To detail the national green growth strategy, the Prime Minister on July 22 approved the national action plan on green growth for 2021-2030 with four important goals. The goals are to reduce greenhouse gas emissions per GDP, to green economic sectors, to green lifestyles and promote sustainable consumption, and to green the transition on the principles of equality, inclusion, and resilience.

Speaking at the conference on the impact of COP26 on the energy transition towards green growth launched on August 17, Nguyen Thi Bich Ngoc, deputy minister of the Ministry of Planning and Investment, said that resources are the biggest problem in realising the goals of the energy transition and moving towards the net zero emissions target by 2050.

According to the World Bank’s calculation, to achieve net zero emissions, Vietnam needs an additional 368 billion USD during 2022-2040, approximately 6.8% of GDP each year.

Of which, the building resilience process alone will account for about two-thirds of this amount because a significant amount of capital needs to be mobilised to protect assets and infrastructure as well as vulnerable populations.

The cost of the decarbonisation roadmap is mainly derived from the energy sector, including the expense of investing in renewable energy and managing the transition away from coal, which could cost about 64 billion USD during the 2022-2040 period.

"Thanks to the fast growth of renewable energy and fuel swap of thermal power plants, the CO2 emissions of the power development plan revision after COP26 have decreased sharply," said Hoang Tien Dung, director of the Electricity and Renewable Energy Department under the Ministry of Industry and Trade (MoIT).

Attending the event, Dang Hoang An, deputy minister of MoIT, said that the energy transition is not only the internal issue of the energy sector, but the transition of the whole economy from an energy-intensive model to one that is energy-efficient.

Electricity and energy demand will continue to grow along with the industrialisation and modernisation of the country’s economy in the future, calculations from the MoIT showed. It is a challenge to meet the growth rate.

Therefore, the most important mission now is to build a suitable, feasible, and sustainable development strategy.

“I would like to stress the importance and urgency of cooperation in research and development of energy science and technology on a global scale, especially technology for large-scale power generation from new primary sources such as hydrogen, ammonia, advanced energy storage technology, and CO2 absorption and storage technology,” An said, adding that it is necessary to raise awareness of the urgency of economical and efficient use of energy in all sectors of the economy.

Ngoc also proposed five ideas related to the energy transition in the future. The first is to carefully calculate the roadmap for the green and sustainable transition to ensure national energy security.

Secondly, during the transition, it is necessary to reduce its impact on vulnerable groups, especially the effect of higher electricity bills on poor households and the transfer or job loss of workers in industries and fields such as fossil energy to renewable energy.

Third, all parties involved in the transition are responsible for it. Four, completing the transition requires the support of finance and technology from developed countries.

Lastly, during the process of implementing the energy transition, it is necessary to effectively carry out assessment, inspection, supervision, and related sanctions to limit and reduce investment, have alternative routes, and close polluting production facilities and high-carbon infrastructure./.