Việt Namnbsp;is expected to achieve its rice export target of 6.3 million tonnes worth US$3.2 billion this year due to high globalnbsp;demandnbsp;and an increase in export prices. 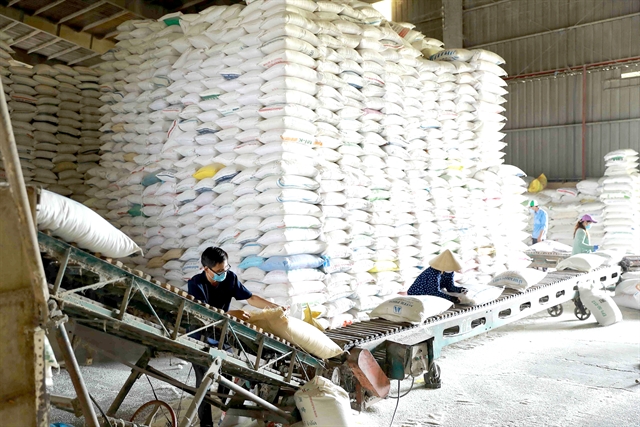 Việt Nam is expected to achieve its rice export target of 6.3 million tonnes worth US$3.2 billion this year due to high global demand and an increase in export prices.

Statistics from the General Department of Vietnam Customs showed the country exported 593,600 tonnes of rice in September, worth over $293.1 million, increasing by 19 per cent in volume and 20.5 per cent in value compared to last year’s figures.

Việt Nam shipped abroad 4.57 million tonnes of rice worth over $2.41 billion during the nine-month period, a drop of 8.3 per cent in volume and 1.2 per cent in value year-on-year.

“The rice export has resumed since September despite the fact that social distancing is still being applied in many southern provinces and cities,” said Nguyễn Quốc Toản, General Director of the Agro Processing and Market Development Authority under the Ministry of Agriculture and Rural Development.

Nguyễn Thanh Phong, Director of Vạn Lợi Company, attributed the increase in the Vietnamese rice export prices to the fact that the Government has boosted its purchase for national reserves, along with the rising demand in the global market since the beginning of September.

Other insiders also expressed their optimism as foreign importers allow the resumption of rice trading once the COVID-19 pandemic is put under control.

Some major rice exporters are predicted to increase their rice exports in the last months of this year and the first half of 2022, they said.

The export prices of Việt Nam’s 5-per cent broken rice soared to the highest level over the past three months, according to the Việt Nam Food Association.

The country’s five-per cent broken rice is currently sold at between $433 and $437 per tonne, surpassing that of other competitors such as Thailand, India and Pakistan.

Specifically, the prices of Vietnamese rice were $49, $68 and $55 higher than that of Thailand, India and Pakistan, respectively.

VCN - After a slight decrease in volume and a slight increase in export value in the first 10 months of 2021, the prospect of rice exports from now until the end of the year as well as in 2022 is evaluated as positive. However, the high price of input materials and rice varieties are a big concern for the whole industry.

Trung An Hi-tech Farming JSC in the Mekong Delta city of Can Tho has won a bid for 15,000 tonnes of rice from the Republic of Korea, CEO Pham Thai Binh announced on November 17.

The General Department of State Reserves under the Ministry of Finance provided over 136,300 tonnes of rice to help pandemic-hit people from August 16 to October 8.