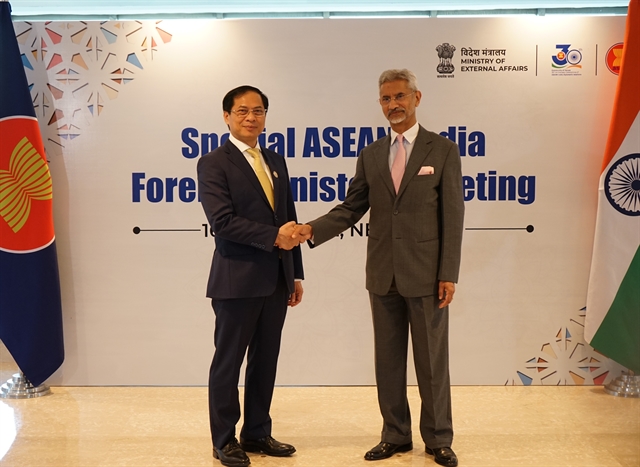 Vietnamese Foreign Minister Bùi Thanh Sơn and his Indian counterpart Subrahmanyam Jaishankar agreed to further strengthen bilateral ties in all fields and raise two-way trade to US$15 billion in 2022.

Meeting in New Delhi on Friday, the FMs shared their delight at the progress of the Việt Nam-India ties, even during the pandemic.

They said both countries should strengthen cooperation in different areas such as culture, people-to-people exchange, science-technology, energy, and education-training in a more effective manner.

They also agreed to work together to remove difficulties facing investment cooperation projects for more sustainable and healthy trade relations.

Sơn, who was in India for the Special ASEAN-India Foreign Ministers’ Meeting (SAIFMM) and the 12th Delhi Dialogue, congratulated India for successfully organising the events.

He thanked the Indian side for providing helpful support to Việt Nam in the COVID-19 fight. He asked for coordination from India to prepare for upcoming high-level visits and invited FM Jaishankar to visit Việt Nam and co-chair the 18th meeting of the Việt Nam-India Joint Committee on economic, trade, science-technology cooperation in Hà Nội in the second half of 2022.

Minister Sơn suggested that India create favourable conditions for Vietnamese farm produce, including rambutan, longan and durian, to enter the Indian market while encouraging Indian firms to invest in Việt Nam in areas such as innovation, high technology, IT and pharmaceuticals.

Jaishankar agreed with the Vietnamese FM’s proposals and pledged to coordinate with Việt Nam to organise activities to celebrate the 50th anniversary of diplomatic relations.

He affirmed that India considered Việt Nam an important pillar of its “Act East” policy, vowing to promote the comprehensive strategic partnership between the two countries in the future.

They also discussed several regional and international issues of shared concern. They agreed to continue their close coordination and mutual support at international and regional forums, especially the UN and the ASEAN-India cooperation framework.

They highlighted the significance of maintaining security, safety and freedom of navigation and overflight at seas and oceans in line with international law and the 1982 UN Convention on the Law of the Sea.

Following the meeting, the ministers witnessed the exchange of a memorandum of understanding on cooperation in cybersecurity between the Việt Nam Cybersecurity Emergency Response Teams/Coordination Centre and Communications and its Indian counterpart.

Earlier, at a meeting with a delegation from the India-Việt Nam Solidarity Committee in West Bengal State led by its President Kusum Jain, Sơn affirmed that Việt Nam treasured the sentiments of generations of Indian friends towards Việt Nam.

He said he hoped Jain and the committee would continue to help connect the Vietnamese and Indian people, reinforcing the comprehensive strategic partnership between the two countries in politics, economy and culture.

Kusum Jain affirmed that the committee would continue to contribute more to the people-to-people exchange between both sides.

On the same day, the two FMs co-chaired a ceremony to celebrate the 50th anniversary of Việt Nam-India diplomatic relations at the Vietnamese Embassy in New Delhi, which drew about 200 Indian guests.

At the ceremony, the logo of Việt Nam-India 50-year-ties was announced, along with the screening of a documentary film on the history of bilateral relations. VNS