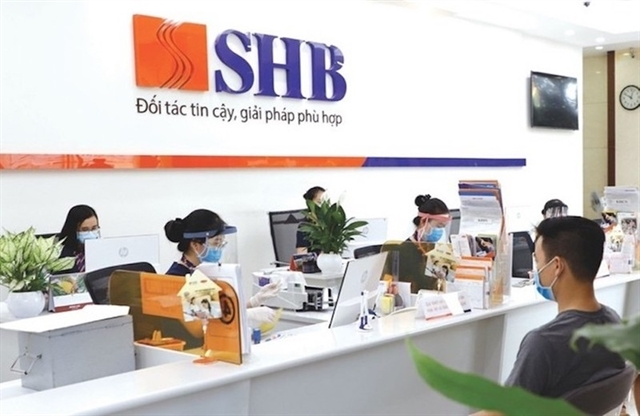 A customer makes a transaction at a branch of Saigon-Hanoi Commercial Joint Stock Bank (SHB). SHB lost 1.03 per cent on Friday. — Photo SHB

Market breadth was negative with 149 gainers and 290 losers, while 68 shares ended flat.

Liquidity stayed low with more than 473.8 million shares traded on the southern bourse, worth VNĐ12.9 trillion (US$556.3 million).

There were still some gainers in the group that helped narrow the declines of the market, such as Techcombank (TCB), Military Bank (MBB), Sacombank (STB) and VPBank (VPB).

According to the macro-economic and market report, BIDV Securities Co (BSC) gave two scenarios for the stock market in June. In the first scenario, BSC forecasts that the VN-Index will continue its recovery after a series of downtrends.

The motivation comes from the Government's determination to start the VNĐ40 trillion support package, with the disease situation in China showing signs of improvement and positive commodity price movements.

“The market will differentiate when the second-quarter business results are announced,” the company said.

In the second scenario, raw material prices continue to increase, putting pressure on inflation while investors' negative and cautious sentiment returns. The Fed’s rate hikes alongside new sanctions from the US and the West on Russia would worsen market sentiment. VN-Index is forecasted to fluctuate in the range of 1,240-1,250 points.

Liquidity was lower than the previous session with 65.2 million shares worth nearly VNĐ1.5 trillion being traded on the northern market. — VNS

VCN - In the same period last year, the profit of steel enterprises increased sharply thanks to the strong growth in steel prices, but in the second quarter of this year, many units recorded losses.

The Vietnamese stock market witnessed a strong correction recently, mainly due to international macroeconomic factors, including global soaring inflation and the US Federal Reverse rate hikes.

Shares post gains on the back of securities stocks

Shares ended Thursday on a positive note thanks to the prosperity of financial-securities stocks.