As the world is transitioning from pandemic to endemic, Việt Nam needs to ensure its vaccination progress and greater adeptness at targeting control measures and support policies to follow suit. 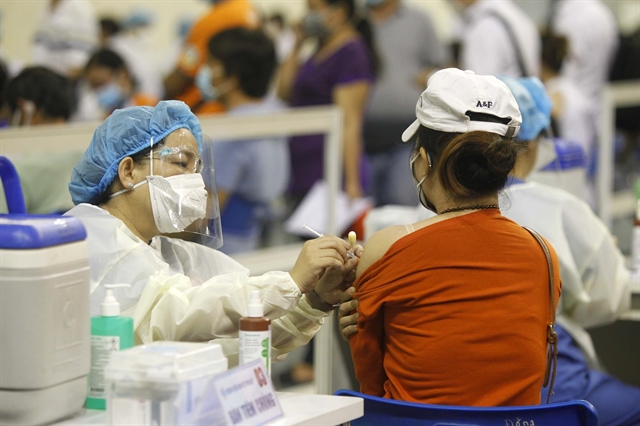 A healthcare worker administers a vaccine for a worker in HCM City. — VNA/VNS Photo Thanh Vũ

As the world is transitioning from pandemic to endemic, Việt Nam needs to ensure its vaccination progress and greater adeptness at targeting control measures and support policies to follow suit.

Experts predicted COVID-19 could become endemic which means the virus may never go away but we can turn it into something much less threatening like influenza and live with it safely.

This is also Việt Nam’s priority in the coming months.

It is not only people around the world who are tired of the pandemic control measures that have been implemented over the past two years, many governments cannot suffer more lockdowns given their devastating impacts on the economy.

Việt Nam’s gross domestic product (GDP) contracted by 6.17 per cent in the third quarter as stringent social distancing in key production areas, especially in HCM City – the country’s economic engine – disrupted most economic activities in the last two months. It is the first quarterly decline recorded in the history of GDP statistics since 2000.

In its update on ASEAN+3 Regional Economic Outlook 2021 published on October 7, the ASEAN+3 Macroeconomic Research Office (AMRO) scaled down its growth forecast for Việt Nam to 2.6 per cent this year from 7 per cent in March’s report.

AMRO’s forecast is in line with other institutions like World Bank (WB) and Asia Development Bank (DB) which also lowered their projections for Việt Nam’s growth this year to 4.8 per cent and 3.8 per cent, respectively.

AMRO Chief Economist Hoe Ee Khor attributed their low forecast to the shutdown in the country’s key production hubs where companies had to allow workers to sleep in the factory. Even when Việt Nam started to ease lockdown measures, many could not get back running immediately.

“The last time when it broke out in Đà Nẵng, Việt Nam was still able to continue very quickly. But this time, the infection is much greater than it experienced before,” Khor told Việt Nam News.

He compared Việt Nam’s experience to what other ASEAN countries suffered last year so they could mitigate impacts on growth this year. Despite that, ASEAN’s growth in 2021 was still projected down from 4.9 per cent to 2.7 per cent and ASEAN+3 from 6.7 per cent to 6.1 per cent.

The Vietnamese government is targeting a 6.5-per-cent GDP growth this year, but last month Minister of Planning and Investment Nguyễn Chí Dũng said GDP growth may reach 3.5-4.0 per cent by year-end.

“But we’re confident that Việt Nam will bounce back more strongly next year. The country will catch up and compensate for what happened this year,” Khor said, noting projections for Việt Nam’s growth increased to 7.5 per cent in 2022 from 6.8 per cent in its March report.

The road to recovery is paved with vaccinations.

Việt Nam has put utmost efforts to speed up its vaccination programme. The country has administered 50.6 million doses of vaccine to date with about 13.7 million people now fully inoculated.

However, its vaccination rate is still falling far behind other countries in the region, with only 14.2 per cent of the population fully vaccinated, even lagging behind its target of 70 per cent by early next year.

Like other countries which are struggling with the Delta variant, Việt Nam is adapting and learning to function within the more uncertain environment. The pandemic has accelerated digitalisation and led to the emergence of new business models and types of firms.

With the country’s rapid vaccination programme, manufacturing sentiment also improved. The latest survey of the General Statistics Office (GSO) showed enterprises in the processing and manufacturing industry were optimistic about the business outlook in the fourth quarter, with 73.7 per cent assessing it to be stable or better.

The strong turnaround in global demand and restart of travel with the launch of bubbles, corridors and sandboxes for vaccinated travellers will also support Việt Nam’s recovery.

However, from the case of Singapore which fully vaccinated 80 per cent of its population, the risk of repeated waves is very high and the Singaporean government recently decided to re-impose some mobility restrictions to minimise severe illnesses and deaths in the community.

Given Việt Nam’s low level of vaccination and a relatively stretched healthcare system at the moment, maintaining a good balance between reopening the economy and controlling infections and health risk remains very challenging for some time.

“As such, carefully targeted control measures will be essential, which should be frequently reassessed for flexible and gradual adjustments with a view toward a full reopening of the economy,” Khor said.

In addition, to pave the way for a resilient recovery, besides efficacious vaccine and treatments, targeted financial support to the corporate sector, especially small and medium enterprises, should be provided to facilitate resumption of business activities, according to Khor.

He also noted regulations concerning logistics and labour movement should be enhanced and harmonised to ensure a smooth reopening and economic recovery.

The Vietnamese Government has shifted its strategic policy direction to “living with the virus safely” and provinces are coming up with roadmaps to reopen the economy safely.

The Government has tasked the Ministry of Planning and Investment to draft a resolution on economic recovery and development in the next two years. The resolution, expected in October, will not only continue the existing support programmes but also expand to include more entities in need of help; increase the support levels to a greater extent to not only help businesses pull through difficulties but keep up with the recovery momentum of the world.

As Việt Nam’s vaccine diplomacy has demonstrated its big success when bringing back more than 50 million doses to the country, Minister Nguyễn Chí Dũng said the Government is speeding up vaccination for priority people while seeking more vaccine sources, facilitating the safe reopening of the economy and accelerating recovery. — VNS