Vietnamese Prime Minister Pham Minh Chinh met with US President Joe Biden on May 12 (US time) as part of his trip to the US for the ASEAN-US Special Summit held in Washington D.C. 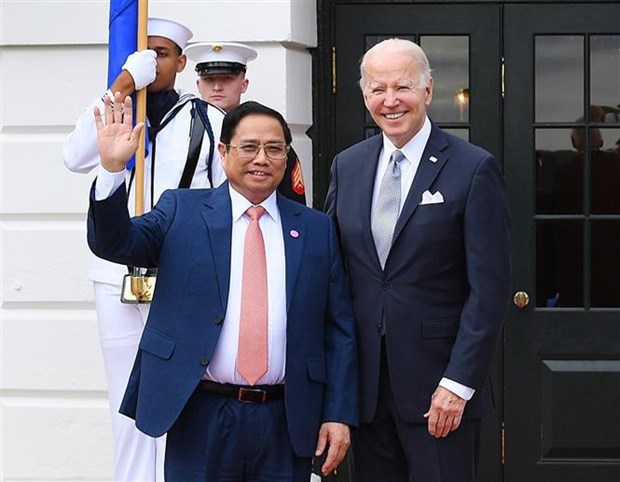 Vietnamese Prime Minister Pham Minh Chinh met with US President Joe Biden on May 12 (US time) as part of his trip to the US for the ASEAN-US Special Summit held in Washington D.C.

During the meeting, the two countries' leaders discussed bilateral relations as well as regional and international issues of mutual concern.

PM Chinh congratulated President Biden on the achievements in the first 14 months of his administration.

President Biden informed PM Chinh that the COVID-19 pandemic was completely under control in the US, and the unemployment rate has dropped to a record-low of over 3.6 percent. The US government has helped create more than 9.8 million jobs and average wages have increased by 5.5 percent.

The Vietnamese Government leader stressed that Vietnam-US relations are "special" as the two countries have overcome the pains and devastations of the war, and are actively cooperating to make the Comprehensive Partnership even more substantial and effective across all areas.

Vietnam wants the US to continue to support and cooperate with Vietnam in areas where the US has strengths and Vietnam has potential and needs, such as disease prevention and control, digital transformation, persification of supply chains, climate change response, and human resources training.

President Biden said that he personally has a lot of affection for the country and the people of Vietnam. When he was still a Senator, he and his friend and colleague, the late John McCain, lobbied US politicians to promote relations with Vietnam.

President Biden said that the US, as a leading developed country, is eager to cooperate and assist developing and less developed countries in various areas, including economic and trade development, disease prevention and control, and climate change response.

In particular, in disease prevention and control, President Biden said that his administration has galvanised the US Congress to allocate 21 billion USD to increase support for countries around the world with COVID-19 vaccines and drugs, medical equipment, as well as strengthen cooperation with countries to effectively respond to future pandemics, not only for the sake of the US but also for the benefit of partner countries, the international community, and the world at large. President Biden affirmed that the US will make every effort to amplify support for Vietnam and other countries in the region in this field.

PM Chinh agreed that issues like climate change, pandemics, and other non-traditional security challenges are global issues which necessitate countries to have a global approach, uphold multilateralism and solidarity to jointly address these problems.

The Vietnamese PM wished the US would strengthen cooperation with and support Vietnam in the development of a green, circular economy, as well as persifying supply chains and sustainable energy transition.

Discussing regional and international issues of mutual concern, President Biden and PM Chinh agreed on the need to respect independence, sovereignty, territorial integrity, and political institutions of countries; refrain from the use of force, and peacefully settle disputes and conflicts on the basis of international law and United Nations' Charter; ensure freedom of navigation and overflight in accordance with the United Nations Convention on the Law of the Sea 1982 (UNCLOS 1982).

With Vietnam-US economic relations having grown steadily over time, the American business community is very optimistic and working very hard in Vietnam, according to Virginia B. Foote, President of the Board of the US International Centre.

Prime Minister Pham Minh Chinh received visiting Speaker of the Singaporean Parliament Tan Chuan-Jin in Hanoi on May 20, emphasising that Singapore is always one of the leading partners of Vietnam in the region.