Prime Minister Pham Minh Chinh on November 26 stressed the need for a new mindset, new breakthroughs, and new values to promote the development of the southeastern region. 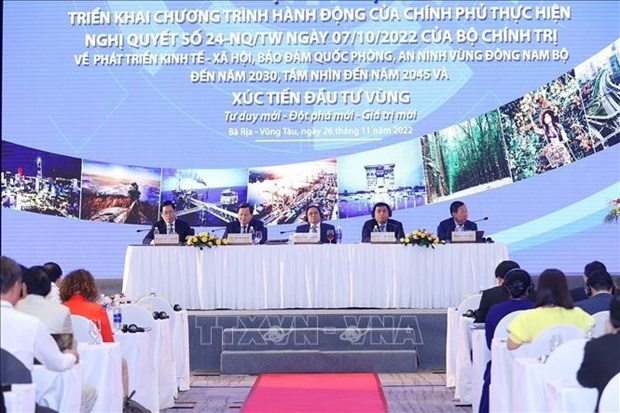 Prime Minister Pham Minh Chinh on November 26 stressed the need for a new mindset, new breakthroughs, and new values to promote the development of the southeastern region.

He made the request while chairing a conference in Ba Ria - Vung Tau province to launch the Government’s action plan for implementing the Politburo’s Resolution No 24-NQ/TW, issued on October 7 this year, on orientations for socio-economic development and defence - security safeguarding in the southeastern region by 2030, with a vision to 2045.

PM Chinh applauded achievements by southeastern localities, which have contributed the most to Vietnam’s GDP, recorded the highest per capita GRDP and the lowest poverty rate, collected the biggest sum of money for the State budget, posted the largest number of enterprises, attracted the most foreign direct investment, and seen the highest average life expectancy.

Pointing out certain problems and shortcomings, he said despite great potential, mechanisms and policies in the southeastern region remain limited, strategic infrastructure connectivity is still ineffective, and public - private partnerships and social resources have yet to be mobilised. It is also facing both subjective and objective challenges, including traffic congestion, climate change impacts, environmental pollution, and wealth gap. 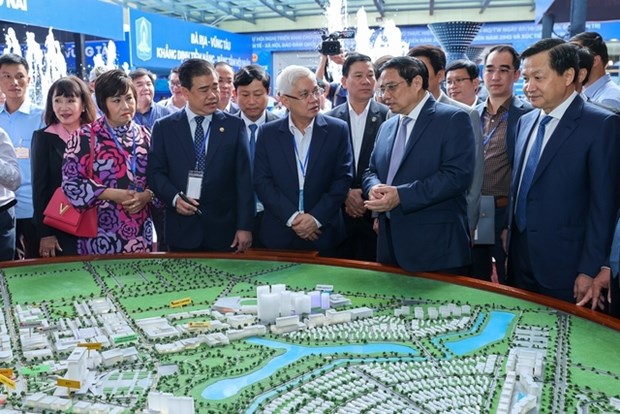 PM Pham Minh Chinh (front, second from right) and officials visit an exhibition on the southeastern region on the sidelines of the conference. (Photo: VNA)

The region should adopt the motto “new mindset - new breakthroughs - new values” to develop, he went on, elaborating that a “new mindset” means the localities should bring into play their self-reliance, develop an independent and self-reliant economy that extensively and substantively integrating into the world, and have people-based approaches when it comes to issues affecting all people.

“New breakthroughs” means they should devise breakthrough mechanisms and policies. Besides, “new values” means they need to achieve faster growth, contribute more to the State budget, further raise per capita income, build the best infrastructure facilities that connect localities in the region and link them with others nationwide and around the world.

The southeastern region should take the lead in the country in terms of green, inclusive, and comprehensive development, the Government leader said.

At the conference, ministries, sectors, and localities presented their action programmes and plans to implement Resolution No 24-NQ/TW. Some international organisations and business associations also talked about investment cooperation to boost infrastructure connectivity, attraction of public attention to development cooperation, and potential and opportunities for green economic cooperation.

PM Chinh also witnessed the announcement of cooperation agreements and the exchange of investment certificates and investment MoUs for 20 projects worth over 10 billion USD and 5 trillion VND among the Ministry of Planning and Investment, the administrations of southeastern localities, partners, and investors./.

Businesses should be development focus: PM

Businesses should be made the centre of innovations and a development focus of the industry and trade sector, Prime Minister Pham Minh Chinh said at a conference in Hanoi on February 3.

Prime Minister Pham Minh Chinh outlined main tasks to improve the material and spiritual life of labourers at a meeting on coordination between the Government and the Vietnam General Confederation of Labour (VGCL) in Hanoi on February 1.

The leader highlighted that social policies have been well performed and poverty reduction, child protection and care, and gender equality promotion carried out comprehensively and effectively.