Party General Secretary Nguyen Phu Trong on April 17 requested the Party Central Committee’s Theoretical Council to further improve both reality analysis and theoretical research on the basis of the Marxism-Leninism and Ho Chi Minh’s ideology so as to fulfill assigned tasks. 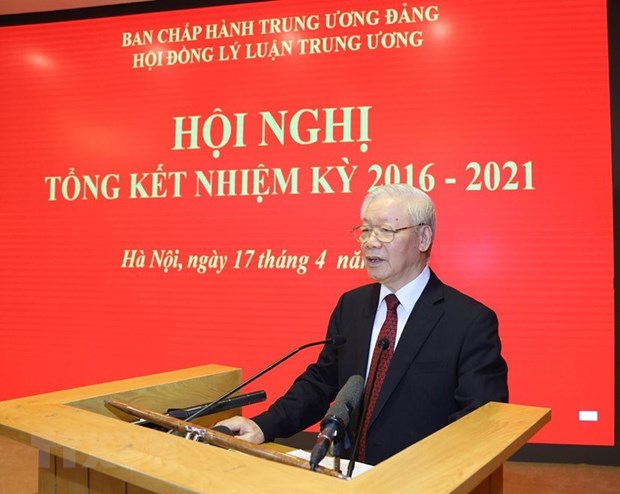 Party General Secretary Nguyen Phu Trong on April 17 requested the Party Central Committee’s Theoretical Council to further improve both reality analysis and theoretical research on the basis of the Marxism-Leninism and Ho Chi Minh’s ideology so as to fulfill assigned tasks.

Speaking at the Theoretical Council’s meeting in Hanoi, the Party leader highly valued the council’s work during 2016-2021, noting that it has continually reformed the operational model and methodology, gathered more scientists, institutes, academies, and universities, and built on the attainments and experiences gained in the previous terms to fulfill its functions and tasks, thereby contributing to common successes of the Party and the country.

He also suggested some issues needing attention in the time ahead and asked for thorough understanding of the requirements in the political theoretical work in the new period. The council's role in providing consultations in terms of viewpoints, strategies and theoretical guidelines remains limited, the Party chief said, adding that many issues in the country's 35-year Doi Moi (renewal) cause and 30-year implementation of the 1991 Platform, as well as newly emerging issues in reality in Vietnam and the world, have not been analysed and clarified.

The 13th National Party Congress identified the strategic vision as well as a detailed road map and steps to develop the country in the next five, 10, and 25 years. The international context and the demand for breakthrough development in the new period require that the Party continue reforming its development mindset in a way that fully taps into Vietnam’s potential, stature and conditions and matches development trends in the world and of the era, he pointed out.

The leader told the council to study new theoretical issues in the world, experiences of developed countries, along with scientific - technological revolutions.

General Secretary Trong also asked the council to improve the quality and effectiveness of political theory-related advice to help the Party Central Committee, the Politburo, and the Secretariat direct national development and defence efforts.

It should also proactively coordinate with ministries, sectors, central agencies, local Party committees, and political theory researchers nationwide in reality analysis and theoretical research, he said, adding that during the 25 years of operations, the council has established itself in the system of central agencies.

On this occasion, the Theoretical Council was granted a merit certificate from the Prime Minister in recognition of its contributions to the compilation of the documents of the 13th National Party Congress, the fight to protect the Party’s ideological foundation, and theoretical research./.

The projects include those on stepping up the national industrialisation and modernisation until 2030 with a vision to 2045.