The second sitting of the 15th National Assembly is scheduled to last for 17 days, starting October 20, heard the NA Standing Committee on October 13. 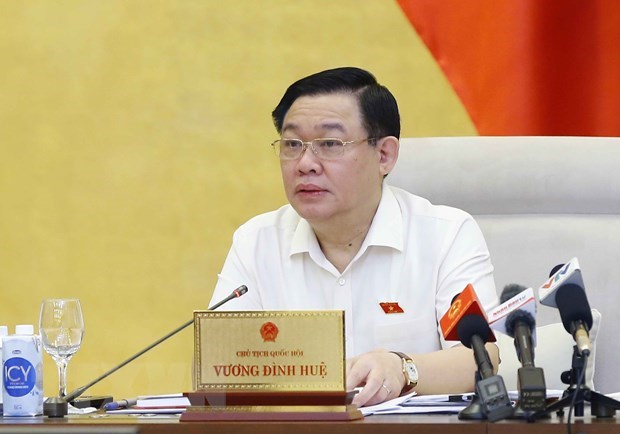 The second sitting of the 15th National Assembly is scheduled to last for 17 days, starting October 20, heard the NA Standing Committee on October 13.

According to plans, legislators will meet from October 20 to November 1, and then from November 8 to 13, according to Bui Van Cuong, NA General Secretary and Chairman of the NA Office.

During the session, the NA will discuss reports on COVID-19 prevention and control, along with socio-economic and budget issues.

A draft resolution on the organisation of online trials will be submitted to the NA for consideration and approval. Meanwhile, a report on the implementation of the investment protection agreement between Vietnam and the EU will be withdrawn from the meeting’s programme as by the end of September the deal was yet to come into force.

The legislature is scheduled to vote to adopt two draft laws and five draft resolutions, and mull over five other bills.

Regarding the voting in the case the meeting would be held both online and in-person, the NA Office has coordinated with the Ministry of Information and Communications, the Ministry of Public Security and other relevant agencies to complete the voting software system.

The NA Standing Committee basically agreed with the plan submitted by the NA General Secretary on holding the second sitting in both online and in-person formats, with an optional plan for online meeting in case the pandemic situation turns complicated.

NA Chairman Vuong Dinh Hue stressed the need to ensure the best quality of the meeting even though the duration will be shortened, in order to make the soundest decisions for such a short period of time.

Although the COVID-19 pandemic has been basically put under control, complex issues still remain, he said, noting that great efforts are needed to reap the highest socio-economic achievements in the fourth quarter of this year.

The legislature will accompany the nation in these efforts, he pledged. /

The National Assembly (NA) Standing Committee on October 11 looked into opinions that the public submitted to the upcoming second session of the 15th parliament, together with some other issues.

The fourth session of the National Assembly (NA) Standing Committee will be held in Hanoi from October 11 – 14, according to the office of the NA.