The 17th session of the National Assembly Standing Committee opened in Hanoi on November 28, and will last only one day. 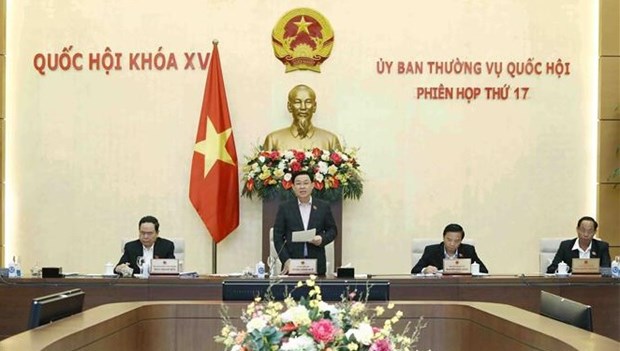 The 17th session of the National Assembly Standing Committee opened in Hanoi on November 28, and will last only one day.

Under the chair of NA Chairman Vuong Dinh Hue, the committee is scheduled to give opinions on the outcomes of the 4th session of the 15th National Assembly which concluded on November 15 and preparations for the legislature's 2nd extraordinary session and the 5th regular session in May next year.

Regarding the NA’s 2nd extraordinary session, Hue said the Prime Minister has submitted to the NA Standing Committee seven urgent issues that need to be handled early, including the national master planning in 2021 – 2030, with a vision to 2050; a draft revised Law on Medical Examination and Treatment; and a number of financial and budgetary issues, including solutions to handle problems and inadequacies at some toll stations and transport infrastructure projects under the BOT investment form.

The NA Standing Committee will look into issues to be put on the agenda of the second extraordinary session.

The committee will also consider and give opinions on a number of issues related to finance and budget, including the allocation of remaining capital from the central budget for the three national target programmes for poverty reduction, new-style rural area building and socio-economic development in ethnic minority-inhabited and mountainous areas, in the 2021-2025 period; and the adjustment of on-lending capital plan of localities in 2022.

They will also comment on the signing of an agreement between the governments of Vietnam and the US on conditions for renovating, constructing and maintaining diplomatic sites of the two sides (COCA Agreement).

A proposal of the Prime Minister on the appointment and dismissal of Vietnamese Ambassadors abroad will also be considered and approved at the session./.

Minister of Planning and Investment Nguyen Chi Dung presented a report on the National Master Plan for the 2021-2030 period with a vision to 2050, following the opening of the 15th National Assembly’s second extraordinary meeting in Hanoi on January 5.