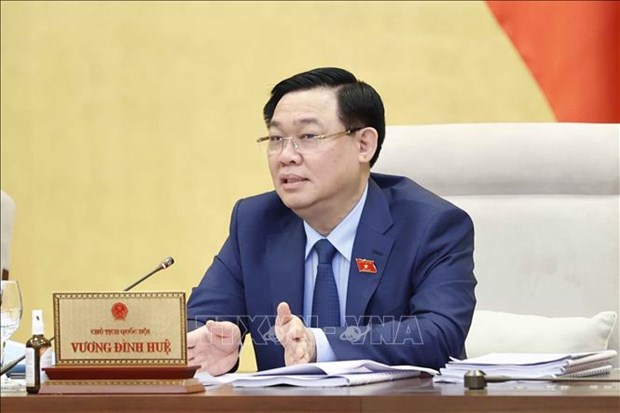 This is the first official visit to Laos by a key leader of Vietnam in the Laos - Vietnam Solidarity and Friendship Year 2022, and also the first by Hue as Chairman of the Vietnamese NA. Hue is also the first foreign parliamentary leader to visit Laos since the country’s 11th National Party Congress and the 9th-tenure NA’s first session.

The visit takes place amid a number of important activities being held in the Vietnam - Laos Solidarity and Friendship Year to mark the 60th founding anniversary of diplomatic ties of the two countries (September 5) and 45 years since the signing of the Laos - Vietnam Treaty of Friendship and Cooperation (July 18).

Vietnam and Laos are neighbours with a traditional and close-knit friendship founded by Vietnamese President Ho Chi Minh, and Lao Presidents Kaysone Phomvihane and Souphanouvong, and nurtured by generations of both countries' leaders and people.

Bilateral cooperation has been strengthened over the time and people of Vietnam and Laos have always walked side by side in the struggles for national liberation as well as national construction and development in each country.

Vietnam is currently among three leading investors of Laos.

The two countries are stepping up economic and transport projects, notably the Vientiane-Hanoi expressway and the Khammouane-Vung Ang railway projects.

Two-way trade exceeded 400 million USD in the first quarter of 2022, posting a year-on-year surge of nearly 20 percent. Vietnam had one new project and adjusted the capital of two existing ones, with the total registered capital surpassing 64 million USD.

The countries have paid due attention to education-training cooperation, as Vietnam has presented scholarships to Lao students and the number rose to 1,220 in 2021.

Vietnam has created optimal conditions for Laos to use the Vung Ang seaport complex to support the neighbour’s maritime transport and assisted Laos with building essential facilities of schools, hospitals and roads.

Of note, in August 2021, Vietnam officially handed over the new Lao NA House after four years of construction, which is a gift from the Vietnamese Party, State and people to their Lao counterparts. It was the venue of the 9th-tenure NA’s first session.

Leaders of the countries held in-person and online exchanges amid complexities of the COVID-19 pandemic.

Vietnam was the first country to send a special flight carrying medical supplies and experts to help Laos fight the second wave of COVID-19 outbreaks.

The countries’ legislative bodies have bolstered bilateral ties in a concerted and effective manner as they maintained the exchange of high-ranking officials and experience sharing between committees and parliamentary friendship groups, as well as closely cooperate at regional and international inter-parliamentary forums.

They have shared experience in law building, arranged symposiums and kept watch on the implementation of signed agreements.

Eight symposiums were held during the 14th NA of Vietnam and the 8th NA of Laos, four of them co-presided over by the countries’ NA chairpersons.

The upcoming visit to Laos by NA Chairman Hue continues to affirm the consistent policy of the Vietnamese Party and State of always giving the highest priority to and attaching importance to developing the Vietnam-Laos great friendship, special solidarity and comprehensive cooperation; and bolstering trust and bond between the countries’ high-ranking officials at large and legislative bodies in particular./.