Laminated wood producers on the line amid falling new orders

The lack of new orders has left laminated wood producers with no choice but to stand idle for months, waiting for market recovery. 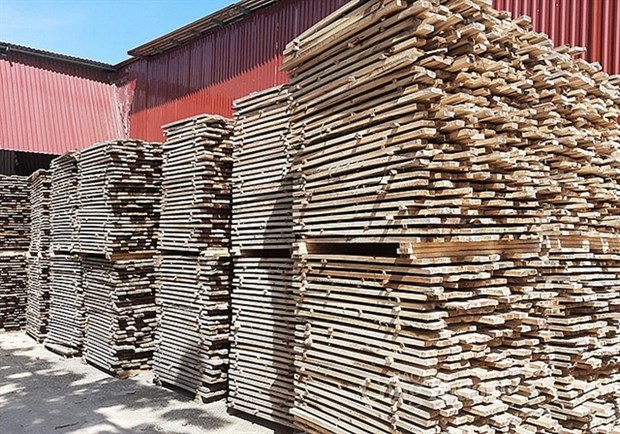 Unsold laminated wood at a company piles up in recent months. (Photo: congthuong.vn)

The lack of new orders has left laminated wood producers with no choice but to stand idle for months, waiting for market recovery.

Do Van Hai, Director of Hai Oanh Forest Production and Import-Export Trading Co. Ltd., reveals that his firm was busy with orders in 2020 and 2021, during which wooden furniture was in high demand.

New orders began to fall in 2022 as his buyers – furniture makers in Ho Chi Minh City and Binh Duong province – saw a sharp decline in their exports, resulting in weak demand for laminated wood. "Our sales have ground to a halt since Q1/2022," said Hai.

Digging into the situation, the director attributes the export shrinkage to the high inflation and economic recession in importing countries, which have caused a shift in consumer spending to essential items.

"Wooden furniture fell in sales because it is not an essential item. As wooden furniture can't sell, so does laminated wood, an input material for the former," he explained.

He also said his company, so far, has 20 billion VND of working capital tied up in inventory, equivalent to 1,400cu.m of laminated wood. At the end of Q1, it had to cut staff by 80%.

The situation is no better for Moc Quyet Thang Co. Ltd., which is struggling with loads of unsold inventory.

Nguyen Hoang Ly, director of the company, said the market has been gloomy for nearly a year and many producers have had to cease production on account of falling new orders.

"New orders have plummeted since wooden furniture exported to the US and EU came to a halt in August," said Ly.

She also said new orders have dropped by 50 % so far, putting her company on the line financially.

It had to make 80% of its staff redundant and close its sawmill in October in the face of falling orders. Now, only a few workers remain in the company to undertake the task of sawing wood.

Hai estimated that it would take up to eight months for his company to clear its unsold inventory, provided the market gets better in the short term. Otherwise, its bankruptcy is in prospect.

He also revealed that some producers in Thanh Hoa province have begun to feel the pinch and reluctantly put their factories up for sale to cut losses.

While laminated wood prices are falling, wood chip prices are moving in the opposite direction.

However, the idea of shifting their focus to wood chips seems unappealing to laminated wood producers as they are uncertain of whether wood chips will keep growing in the next few years and whether it is too late to change their course.

For the time being, most producers are opting for 'hibernation' to bide their time. How long the hibernation will last depends on the specific financial situation of each producer./.

Wood exports to hit record of 18 billion USD this year

The export turnover of wood and wood products is expected to set a record high of 18 billion USD in 2023, with wood pellets and woodchips forecast to enter the one-billion USD club.

Wood industry makes most of each advantage to fulfil set targets

Global political and economic fluctuations in 2022 have affected import and export activities, especially those of enterprises operating in the wood manufacturing and processing industry, making them calculate each step in the year-end period to achieve the set targets.

Position Vietnamese wood and furniture brands on the global map