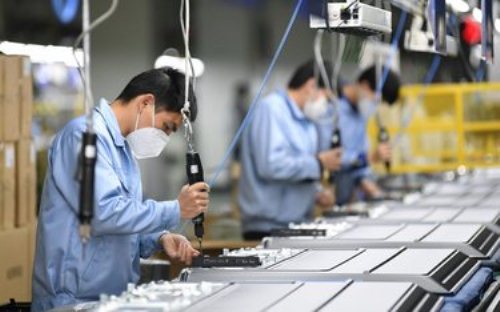 European business leaders in Việt Nam remain confident about the future prospects of their own companies. — Photo baophapluat.vn

The fourth wave of COVID-19 in Việt Nam has knocked the confidence of European business leaders, according to new data from the EuroCham Chamber of Commerce (EuroCham) Business Climate Index (BCI).

Before the fourth wave struck, the BCI had almost climbed back to pre-pandemic levels, reaching 73.9 in quarter one. However, this latest outbreak and the spread of new variants have seen the Index fall almost 30 points in quarter two to 45.8. This is a significant drop, though not as steep as during the first outbreak of the pandemic in 2020.

The fourth wave has also led to increased pessimism about the short-term outlook of Việt Nam’s business environment. Just one-fifth of EuroCham members (19 per cent) believe that the economy will stabilise and improve in the next quarter. That’s down from almost two-thirds (61 per cent) in quarter one.

However, business leaders remain confident about the future prospects of their own companies. More than half (56 per cent) anticipate an improved or neutral performance in quarter three. And eight-in-ten (80 per cent) plan to maintain or increase their headcount and investment.

The BCI also shows the urgent need for Việt Nam to roll out a mass vaccination programme. More than half of business leaders (58 per cent) predict that their companies would see a significant, negative impact if their staff could not be vaccinated in 2021. Meanwhile, almost half (44 per cent) have not been approached to prepare for vaccination.

EuroCham and its nine business associations asked their members if they would be willing to cover the cost of vaccinating their own staff. Of the 430 who responded – representing around one-third of the chamber’s total membership and around 95,000 staff – 399 said they would be prepared to do so. With full vaccination requiring two shots, this suggests that at least 190,000 doses will be needed just to vaccinate the direct staff of these companies alone. However, the true number of doses required could reach over half a million if all European enterprises and their staff were taken into account. Meanwhile, 259 of those who responded are also willing to cover the cost of vaccinating the families of their staff members. When these dependents are taken into account, the true number of doses required will be much higher.

EuroCham Chairman Alain Cany said: “The EuroCham BCI reaffirms the urgent need for Việt Nam to accelerate vaccinations. Local lockdowns, social distancing, and travel restrictions are not permanent solutions and will cause significant economic harm over the long-term, as our data shows.”

“There is no route out of this fourth wave without an ambitious and accelerated mass vaccination programme which will enable normal life to resume. European companies are prepared to cover the cost of protecting their own staff – this will help to speed up vaccination while also reducing the financial and administrative burden on the state. But we need access to sufficient supplies. EuroCham is using all the tools at our disposal to support Việt Nam in procuring enough doses, and we are confident that business confidence will rebound as soon as we can achieve mass vaccination.”

The BCI is a regular barometer of European business leaders and their views of the trade and investment environment. Each quarter, it tracks the performance of EuroCham’s member companies and their perceptions of the economic outlook in Việt Nam. The fieldwork and data collection for the BCI is conducted by YouGov Vietnam.

Thue Quist Thomasen, CEO of YouGov Vietnam, added: “Despite the short-term shock of this fourth wave, the data shows that Việt Nam’s long-term prospects remain positive. European business leaders are predicting maintaining or increasing their staff and investment plans – even in the midst of this current outbreak – which demonstrates a continued confidence in Việt Nam’s trade and investment environment.” — VNS

Vietnamese enterprises should be cautious before transporting agricultural products to Lào Cai's Kim Thành II border gate for export to minimise losses although Chinese authorities are piloting the re-import of these products, according to Hà Đức Thuận, deputy head of Lào Cai Border Gate Management Board.

The COVID-19 pandemic has forced many enterprises to close, with workers losing their jobs and their lives seriously affected. However, through the use of technology, businesses can rebuild management and operations to accelerate and create breakthroughs, experts have said.

The number of newly-established enterprises in the first five months of thenbsp;year was 62,961, up 12.9 per cent over the same period in 2021, according to the General Statistics Office (GSO).