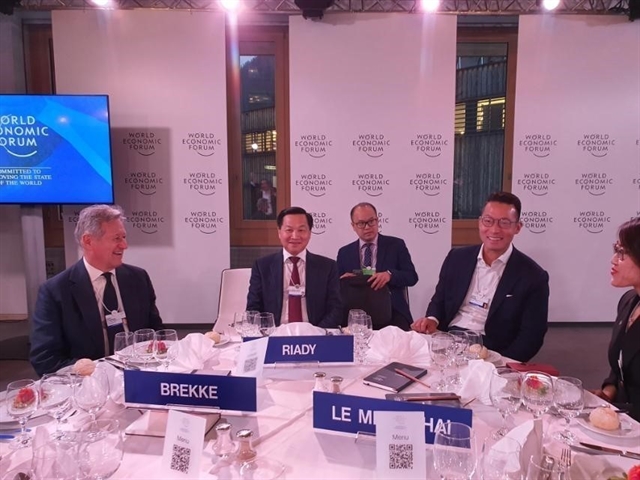 He underlined that digital transformation, combined with sustainable development, must be carried out on three levels.

International cooperation must be bolstered at the global level to support developing nations to narrow the digital gap and ensure that no one is left behind. Global and multilateral mechanisms and frameworks are needed to manage emerging issues related to the digital economy.

A digital ecosystem must be built at the national level, including digital institutions, infrastructure, management, and personnel. Public-private partnerships need to be strengthened to maximise stakeholder engagement.

Businesses have to take advantage of digital technology and data to improve productivity and competitiveness, use energy efficiently and develop green products, thereby creating momentum for sustainable development.

Deputy PM Khái had a meeting with Lithuanian President Gitanas Nauseda, during which the two sides affirmed that they treasure the traditional friendship between Việt Nam and Lithuania.

As the two countries celebrate the 30th anniversary of their diplomatic relationship this year, Khái suggested that the two sides make the best use of bilateral cooperative mechanisms and coordinate to hold trade promotion events to bolster economic ties.

He thanked Lithuania for its support of the Vietnam-EU Free Trade Agreement (EVFTA) and for being among the first countries to ratify the EU-Vietnam Investment Protection Agreement.

Meeting with Federal Councillor Guy Parmelin, the head of the Federal Department of Economic Affairs, Education and Research of Switzerland, Deputy PM Khái suggested that the two countries intensify measures to restore their economic ties, especially in fields where Switzerland has strength, such as finance-banking, insurance, manufacturing, pharmaceuticals, farm produce processing and tourism.

Parmelin said he hoped the two countries would continue to push ahead with negotiations on a free trade agreement between the EFTA and Việt Nam. He affirmed that Switzerland would soon hold a discussion with Việt Nam for the early conclusion of the FTA, thus promoting the sustainable development of bilateral trade ties.

In another meeting, Deputy PM Khái and Peruvian Foreign Minister César Rogrigo Landa noted their joy at developing bilateral ties between the two countries, particularly in economics-trade-investment. They said that Việt Nam’s Bitel project in Peru and Peru’s investment in beverage and tourism in Việt Nam was operating effectively.

Cormann said that Việt Nam was among the most important partners of the OECD in Southeast Asia. He pledged that the organisation would work closely with Việt Nam to help the country realise its development goals.

At another meeting with Minister-President of Flanders Jan Jambon, Deputy PM Khái noted the development trend of Vietnam-Belgium ties and that the region was a significant development partner of the Mekong River Commission.

The Vietnamese Government official expressed his hope that the two sides would continue to join hands for the early approval of the EVIPA by Belgian agencies. He urged Belgium and the EU to promote investment in the Mekong River region and the Mekong Delta in smart agriculture, climate change adaptive irrigation, green infrastructure and human resources training.

The Minister-President of Flanders pledged to work for the early ratification of the EVIPA and promote the region’s cooperation with Việt Nam in fields of the region’s strength, for example, agriculture, maritime trade, education, science-technology, water resources management, and climate change adaptation. — VNS

The World Economic Forum (WEF) Annual Meeting 2023 will be a chance for Vietnam to share with the international community its vision on common efforts in settling emerging global challenges, as well as Vietnam's policies and experience in international integration and socio-economic development, Ambassador Le Thi Tuyet Mai, head of the Permanent Mission of Vietnam to the United Nations (UN), WTO and other international organisations in Geneva, told Vietnam News Agency on the threshold of the forum.

The strengthening of international solidarity and cooperation is key to addressing interlocking global challenges, affirmed Permanent Deputy Prime Minister Pham Binh Minh while addressing the general debate of the 77th Session of the United Nations (UN) General Assembly in New York on September 24.

The Government Office has issued an announcement on Deputy Prime Minister Le Minh Khai’s conclusions at a meeting on interest rate support package in accordance with the Government’s Decree No.31/2022/ND-CP dated May 20.