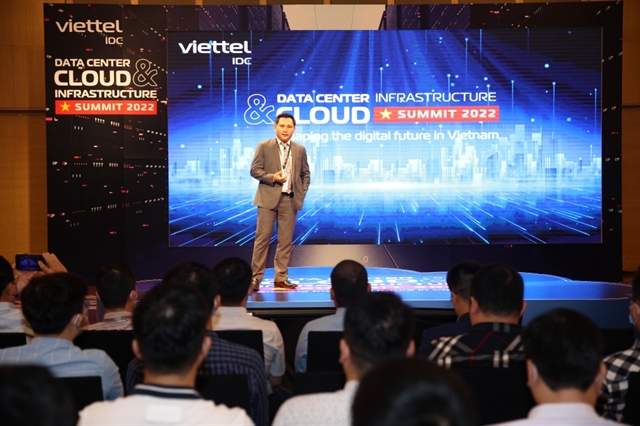 The Data Center and Cloud Infrastructure Summit 2022 took place in Hà Nội this week, as information and communication infrastructure plays an increasingly important role in digital, economic and social life.

Hoàng Văn Ngọc, Director of Viettel IDC, said that data usage in Việt Nam had increased seven-fold in the past 10 years.

The number of internet subscribers now accounts for 75 per cent of all Vietnamese households.

“Currently, there are about 20 million to 25 million households that already have fixed broadband. This is the rapid growth of connectivity and people's needs," said Ngọc.

Deputy director of the National Institute of Information and Communications Strategy Trần Minh Tuấn said that the data centre market in Việt Nam had 27 data centres over 11 enterprises.

Currently, Việt Nam's data centres are mainly concentrated in the North and South.

In the near future, there will be a big shift when the digital transformation trend takes place strongly in small and medium enterprises, from which we could hope for the explosion of the data centre and equal development in all three regions, he added.

These include foreign enterprises Google, Microsoft, Amazon, and large-scale domestic enterprises such as Viettel, VNPT, CMC, FPT and some small businesses providing applications.

The cloud computing market share in Việt Nam is mainly in foreign enterprises' hands. Vietnamese enterprises account for only about 20 per cent of the market share with about VNĐ900 billion (US$39 million).

The rest, 80 per cent of the cloud market share, is held by foreign providers. Amazon Web Services (AWS) accounts for the most with 33 per cent, and Google and Microsoft account for 21 per cent.

If pided by region, cloud computing in the North is still at the highest level with 42 per cent, the South at 39 per cent and the Central region at 16.55 per cent.

According to the Ministry of Information and Communications assessment, there will be three major trends at home and abroad affecting the data market: digital transformation, the development of 5G networks and edge computing, and the need to build a data centre serving the region.

By 2030, data centres will meet green standards, while 100 per cent of State agencies and 50 per cent of Vietnamese people will use cloud data.

Enterprises and their big dreams for economic recovery journey

VCN - In the first months of 2022, the number of businesses entering the market increased sharply again, reaching an all-time record. This was possible thanks to the recovery efforts of the economy and businesses. Since then, many businesses have been bolder for their investments, with the expectation of stronger growth.

While anbsp;series ofnbsp;sanctions caused the Russian market to wobble at times,nbsp;Vietnamese textile and garment enterprises havenbsp;stood firm and continued to earn profits.

Start-up enterprises are in recovery

VCN - With efforts towards digital transformation, calls for investment capital and cooperation for development, many start-up enterprises (start-ups) in Vietnam have quickly recovered and grown steadily. Many ups are even forecast to become the next "unicorns" (star-tup enterprises with a capitalization of over US$ 1 billion).