VinFuture Prize, an international award founded in Vietnam to honour scientific achievements, gave out 4.5 million USD worth of prizes to several global scientists on January 20. 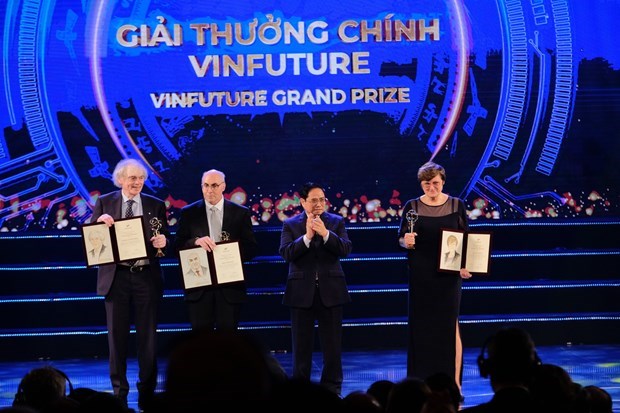 At the award ceremony (Photo: VNA)

VinFuture Prize, an international award founded in Vietnam to honour scientific achievements, gave out 4.5 million USD worth of prizes to several global scientists on January 20.

Managed by the VinFuture Foundation, which was set up by Vingroup Chairman Pham Nhat Vuong and his wife Pham Thu Huong, the annual VinFuture Prize is a global science and technology award to recognise groundbreaking scientific and technological discoveries.

It comprised a VinFuture Grand Prize valued at 3 million USD and three special prizes, each worth 500,000 USD, for female innovators, innovators from developing countries, and those with outstanding achievements in emerging fields.

Three scientists, namely Katalin Kariko and Drew Weissman from the US and Pieter Rutter Cullis from Canada, were awarded with the VinFuture Grand Prize for their contributions to the development of the mRNA vaccine technology.

Chinese-American scientist Zhenan Bao was awarded with a VinFuture Prize dedicated to female innovators for her research on "electronic skins" capable of stretching, healing like normal skins and are biodegradable.

South African scientists Salim Abdool Karim and Quarraisha Abdool Karim were awarded a VinFuture Prize dedicated to developing country innovators for the invention of a gel with tenofovir, a product for women to prevent HIV infection.

US scientist Omar Yaghi was awarded a VinFuture Prize for outstanding achievements in emerging fields for his research into water and material science.

Present at the award ceremony, Prime Minister Pham Minh Chinh affirmed that Vietnam prioritises the development of science and technology, considering it a strategic breakthrough for socio-economic development.

The Vietnamese State is stepping up the building of mechanisms and policies to materialise the Party’s guidelines and promote the mobilisation of resources for innovations.

He lauded efforts by the VinFuture Foundation in building and developing VinFuture Prize and expressed his hope for new steps in scientific application in Vietnam.

In the first season, the organising board received over 1,200 entries from 654 leading universities, 51 well-known research institutes and 42 national science academies globally. Among the 599 innovations in the competition, about 100 are made by top 2 percent of the most-cited scientists in the world. Female scientists in the event accounted for 34.3 percent of the total, many of them winners of Nobel, Breakthrough, Tang and Japan prizes.

The competition drew participants of 60 countries globally, 52.6 percent of their projects are from North America and the European Union. Vietnam also joined in with 17 projects./.