Vietnam exported 5.3 billion USD worth of goods to Canada in 2021, up 21 percent year-on-year despite facing challenges caused by the prolonged pandemic, according to the Vietnamese Trade Office in Canada. 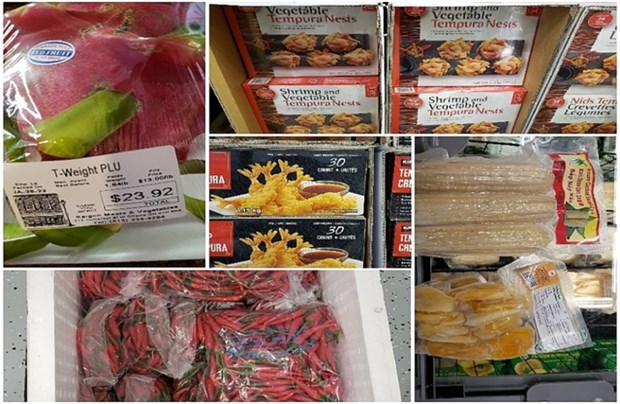 Vietnamese products on the shelves of a Canadian supermarket. (Photo: moit.gov.vn)

Vietnam exported 5.3 billion USD worth of goods to Canada in 2021, up 21 percent year-on-year despite facing challenges caused by the prolonged pandemic, according to the Vietnamese Trade Office in Canada.

This marked the third consecutive year that Vietnam has recorded positive export growth to the market since 2019 after both countries officially became members of the Comprehensive and Progressive Agreement for Trans-Pacific Partnership (CPTPP).

According to the office, the trend of shifting supply chains coupled with the impressive production capacity of local enterprises helped lure the great interest of Canadian businesses in the Vietnamese support industry products.

Meanwhile, garment, textile and footwear exports regained their growth momentum, rising 16.6 percent to nearly 1.4 billion USD, while furniture exports saw a yearly increase of 6.5 percent to 234 million USD thanks to the relationship between businesses of the two countries, in which Canada firms exported wood materials to Vietnam while Vietnamese companies produced and then exported finished wooden goods to Canada.

Despite an increase in market demand, a lack of containers in recent years resulted in a shortage of supply for local agricultural products, typically fresh fruits to Canada last year, the office said.

Though Vietnam is now Canada's largest trading partner in Southeast Asia, there remains room for Vietnamese businesses to penetrate the market in the future as Vietnam’s market share accounts for a modest 1.7 percent of Canada's import value.

According to Vietnamese Ambassador to Canada Pham Cao Phong, to adapt to the new normal situation in the post-COVID period, businesses of the two countries needed to discuss the establishment of a common governance support centre, B2B model, research and development, after-sales service, digitisation and digital security./.

VCN - The implementation of the UKVFTA Agreement has brought impressive growth to two-way trade between Vietnam and the UK in 2021 and is continuing to show a positive recovery in the post-Covid-19 period.

Banks want permission to connect to national population database
Lastest
Two-way trade between Vietnam and the UK recovers thanks to UKVFTA Better policies needed to develop ocean economy Newly-established businesses in H1 exceed 70,000 for first time Pressure to increase the exchange rate, will the State Bank take action? More than 10 million medical masks exported in May Explosive e-commerce growth drives demand for logistics Ministry listens to firms" difficulties, pledges to raise support Việt Nam attracts more than $14 billion of FDI in H1 Vietnam ranks second in ASEAN in terms of green debt development How to speed up exports of processed foods to Japan?