Since the establishment of their bilateral diplomatic ties in 1962, Vietnam and Laos have promoted cooperation across spheres, with their trade exchange posting substantial growth, benefiting both countries. 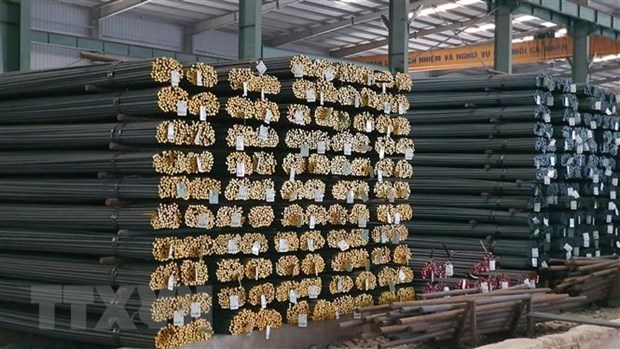 Iron and steel are among Vietnam's major export items to Laos. (Photo: VNA)

Since the establishment of their bilateral diplomatic ties in 1962, Vietnam and Laos have promoted cooperation across spheres, with their trade exchange posting substantial growth, benefiting both countries.

During the 2016-2020 period, the two-way trade saw stable expansion and reached the target of over 1 billion USD, but then suffered from the impact of the COVID-19 pandemic and natural disasters.

The Asia-Pacific Market Department at the Vietnamese Ministry of Industry and Trade (MoIT) said that the bilateral trade exceeded 1 billion USD in 2020, down 11.5 percent year-on-year, of which Vietnam’s exports were worth 571.7 million USD, down 18.5 percent.

The results are attributable to the political resolve by Vietnamese and Lao leaders and the drastic management of competent agencies to remove obstacles facing businesses of the two countries and create optimal conditions for them to quickly adapt to the new situation.

In the first four months of this year, the two-way trade was valued at 558.2 million USD, representing a year-on-year increase of 20.2 percent, of which Vietnam’s export was 192.2 million USD, down 11.8 percent.

Le Hoang Oanh, head of the department, explained that domestic firms have focused on iron and steel export to the EU, thus resulting in the recent decrease in shipments to Laos.

In the four-month period, Vietnam imported 366 million USD worth of goods from the neighbour, up 48.5 percent year-on-year. Its major import items included rubber, wood and timber products, fertilizers, vegetables, ore and minerals.

Minister of Industry and Trade Nguyen Hong Dien said since the 11th conference on border commerce cooperation in 2018, the bilateral trade ties have made new strides.

The two countries aim to increase their trade by 10-15 percent each year in a stable and sustainable manner, Dien noted.

Experts, however, pointed out that the policies that are intended to attract investments in production, manufacturing, infrastructure, transport and logistics at border gate areas have yet to prove their effectiveness.

According to them, with eight pairs of international border gates, seven pairs of main gates and 18 others of auxiliary gates, Vietnam and Laos have favourable conditions to boost their trade ties.

The two countries have also benefited from trade agreements in the Association of Southeast Asian Nations (ASEAN) along with their bilateral trade deals. Moreover, Vietnamese goods have been favoured in the neighbouring country.

Vietnamese exporters should also ride the wave of Vietnamese investment in Laos to boost export, experts said, noting that Vietnam is currently the third biggest investor in Laos, while Laos is Vietnam’s largest recipient of Vietnam’s outbound investment, mainly in energy, banking, the planting of industrial trees, and garment-textile.

Minister Dien said Vietnam and Laos will work on preferential breakthrough mechanisms and policies to lure more investments in infrastructure in border gate economic zones, and in production and trade activities in border areas, while pushing ahead with negotiations of a memorandum of understanding on border trade infrastructure development and connectivity between the two governments.

Apart from amending and supplementing the signed documents like the Vietnam-Laos trade agreement and the 2007 Hanoi agreement, the two sides will further coordinate in the fight against smuggling and trade fraud to create a healthy environment for border trade, he said./.