Việt Nam’s stock market is still cheap at 11.5 times forward P/E and expectations ofnbsp;EPSnbsp;growth of over 20 per cent this year compared to an average P/E of 16.2 for its emerging market ASEAN peers. 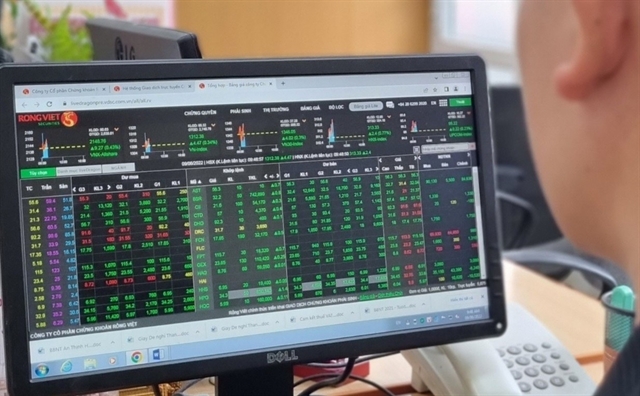 Việt Nam’s stock market is still cheap at 11.5 times forward P/E and expectations of EPS growth of over 20 per cent this year compared to an average P/E of 16.2 for its emerging market ASEAN peers.

“All of this sets the stage for further gains in the VN-Index as 2022 progresses and we see signs that both foreign and Vietnamese investors agree,” Michael Kokalari, chief economist at VinaCapital, said.

The Government’s renewed efforts to strengthen regulatory oversight of the stock and bond markets initially fuelled a sell-off in April and in the first half of May.

However, on May 20, several leadership changes were announced at the State Securities Commission and HCM Stock Exchange, which made investors start looking beyond the recent anti-corruption drive.

There had been concerns that the State Bank of Vietnam would curtail the flow of credit to the real estate market, following recent guidance on this issue.

This was another Việt Nam-specific factor that had been weighing on the stock market.

But it now appeared that the SBV’s guidance urging banks to be prudent in their real estate lending, which was issued in conjunction with the Government’s other regulatory crackdown activities, was similar to guidance it had regularly issued over the last few years.

Furthermore, last week a senior official said the SBV did not aim to curtail the flow of credit to the real estate sector, but was only monitoring the situation closely.

Finally, corporate bond issuance by real estate companies plunged in April, but loan growth to the sector probably outpaced overall credit growth, and developers’ pre-sales were reportedly strong, which would limit their need to borrow money.

“Việt Nam’s benchmark VN-Index has rebounded by 12 per cent since hitting a bottom on May 16, driven by a modest thawing of recent bearish sentiment in global stock markets over the last few weeks, and by positive developments in Việt Nam.

“Specifically, the expectation that the Fed may pause its rate hikes boosted global stock markets, while the easing of COVID restrictions in China improved sentiment towards Việt Nam’s stock market, and some of the Việt Nam-specific concerns that weighed heavily on the VNI in May have eased.”

Việt Nam’s economic recovery continued to accelerate in May.

Even as the market sold off, foreign investors bought over US$150 million in stocks in May (including about $125 million of foreign inflows into ETFs) after having sold around $290 million worth of stocks in Q1.

Trading volumes plunged by over 33 per cent month-on-month in May, implying that Vietnamese retail investors were not panicked into selling.

“We believe the confidence exhibited by both local and foreign investors stems in part from the 33 per cent year-on-year surge in Việt Nam’s earnings growth in Q1, which in turn should also help drive further gains for the VN-Index later this year, although the next 2-3 months are likely to be fairly volatile.”

According to VinaCapital, four developments are currently supporting local investor sentiments: the perception that the recent wave of margin-prompted selling is over, the announcement of a 2 per cent interest rate subsidy by the Government to support SMEs and other businesses, continued positive developments in the economy including a record year-on-year surge in retail sales in May, and the growing perception that current global events will benefit Việt Nam’s economy.

Kokalari said: “The post-COVID economic recovery is going to be much stronger than most analysts had previously expected, driven by a resurgence in domestic consumption and foreign tourist arrivals.

“We are still forecasting 6.5 per cent GDP growth this year, but we see increasing upside to that forecast, and are aware of some forecasts that are as high as 9 per cent.

“In short, the jump in retail sales has dramatically accelerated as 2022 has progressed and the manufacturing sector output grew by 9 per cent year-on-year in the first five months of this year, which is a much stronger performance than we expected.

“We estimate that outstanding stock margin levels have fallen by about 30 per cent, which has washed out the most aggressive source of selling pressure in May, paving the way for a further recovery in the market.

“We expect earnings growth of over 20 per cent for Việt Nam’s stock market this year, although we expect earnings for companies in our funds to grow by over 35 per cent, which helps explain why those stocks are trading at an even lower P/E valuation multiple than the overall market.” — VNS

Representatives of the World Bank (WB) and FTSE Russell have committed to further supporting Vietnam to build a sustainable stock market, particularly via regularly exchange and coordination in the market upgrading matter.