More than 4,300 coffee growing households in the northern province of Son La will receive support in coffee farming, production and trade under a 2-year project by the Foundation for International Development/Relief (FIDR) Vietnam Office – a Japan-based international non-Governmental organisation. 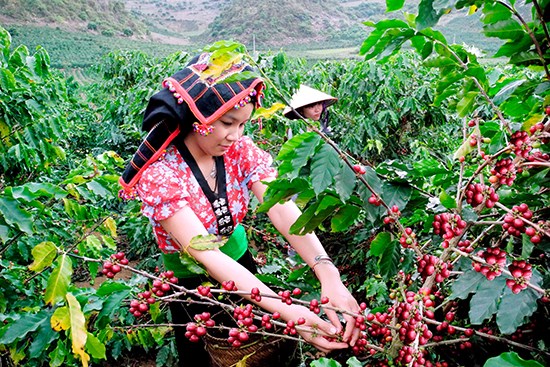 More than 4,300 coffee growing households in the northern province of Son La will receive support in coffee farming, production and trade under a 2-year project by the Foundation for International Development/Relief (FIDR) Vietnam Office – a Japan-based international non-Governmental organisation.

Under the project, local coffee growers will have the chance to join training courses to improve their literacy, negotiation skills, farming techniques and trade-related skills, she said.

Kahori Miyake, representative from AEON, said that the project was prepared for more than one year but due to the COVID-19 pandemic, the project's activities were changed to adapt to the new situation.

However, the participation of parties including the Tay Bac University, FIDR, Son La authorities and coffee farmers made the project run effectively.

“People are happy to enjoy a delicious cup of coffee. When having the coffee, we should thank those who grow it, process it and sell it,” she said, adding that the AEON group expected that their consumers, especially those in Japan, to know about Son La coffee and coffee growers.

Dinh Thanh Tam, Rector of the Tay Bac University, said that Son La province was the home of delicious fruit and farming produce thanks to a good climate and geographical conditions.

Coffee has been grown in Son La province since the 1980s. The province currently has nearly 18,000 hectares of coffee, with last year’s production at more than 25,000 tonnes.

Ca Thi Bien, a farmer in Chieng Ban commune, Mai Son district, said that she was happy to see that people liked the coffee made in Son La.

She said she expected to learn more about farming and trading thanks to the project’s support so that she could have a better stable income, thus could pay her debts, send her children to school and open a grocery store.

Old coffee trees with low yield were common in a large area. Coffee farmers have yet to apply measures to ensure sustainable development or become resilient to climate change, Phong said.

Nguyen Xuan Hoang, Vice Chairman of the People’s Committee of Thuan Chau district, said that most of the 5,500 hectares of coffee in the district were in hilly land, causing difficulties for farmers in harvesting and transporting.

Farmers used motorbikes to carry coffee from farms to purchasing sites of wholesalers, so labour costs are very high. Most of the farmers used home-made fertilisers and conventional farming techniques without proper understanding, Hoang said.

“Notably, farmers sold coffee to wholesalers and hardly knew where the coffee would go next, or for which companies. As a result, Son La coffee has not developed its own brand despite its good quality,” Hoang said, urging further support in brand development.

The project is expected to offer solutions to lower input costs as well as proper market understanding so that farmers can get better coffee prices./

The Trade Promotion Agency under the Ministry of Industry and Trade (MoIT) and Vietnamese trade offices in Africa will jointly organise a session to give consultations to domestic businesses on exporting coffee to the African market.

VCN - The competitiveness of products such as garments, sports shoes, rice, coffee, pepper and seafood of Vietnam is increasing in the French market and may increase its market share in the future.