Despite the prolonged COVID-19 pandemic, shrimp exports have remained strong this year, also causing local retail prices to rise in the Mekong Delta. 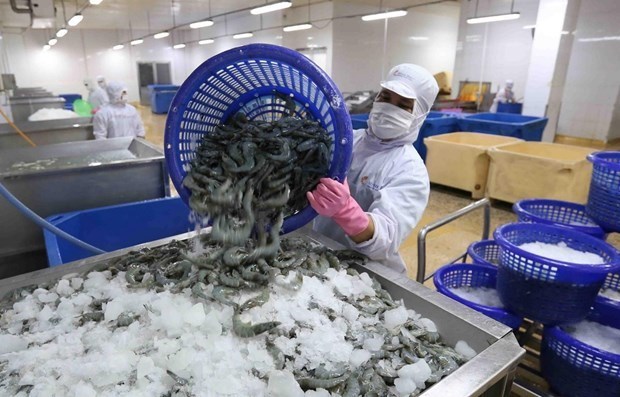 Despite the prolonged COVID-19 pandemic, shrimp exports have remained strong this year, also causing local retail prices to rise in the Mekong Delta.

According to the Vietnam Association of Seafood Exporters and Producers (VASEP), in the first 10 months shrimp exports rose by 2.6 percent to 3.2 billion USD, with shipments to the US rising sharply.

The US accounted for 24 percent of exports as they rose 25 percent to nearly 1.7 billion USD.

Exports of frozen whole shrimp, especially tiger shrimp, decreased due to the high prices and tight control over frozen food imports in China.

According to experts and businesses, thanks to lifting of COVID restrictions in southern provinces and cities, supply chains have been re-established, with shrimp exports gradually recovering since October.

Besides, the fourth quarter is when demand for shrimp peaks in Europe and the US.

According to the Vietnam Industry and Trade Information Centre, global demand for shrimp is generally on the rise, especially in large markets.

With supply from other countries still hit by the pandemic, Vietnam’s exports are likely to rise enormously in the next few months due to the numerous free trade agreements it has and its production remaining steady.

Exports by delta provinces will remain high due to the many sales contracts businesses there have signed, but rising transport costs and potential COVID-related complications remain major challenges, according to many provinces.

Việt Nam's pangasius (tra fish) export turnover is forecast to reach US$1.7 billion this year, up 13 per cent year on year, according to the Việt Nam Association of Seafood Exporters and Producers (VASEP).

A ceremony was held in Long Khanh Industrial Zone in southern Dong Nai province on January 5 for exporting the first batch of processed fruits to Europe, the Republic of Korea (RoK), Japan, Russia and the Middle East.

Inflation would be controlled in 2022: Experts
Lastest
What makes a record of more than US$600 billion of import and export Four groups of policies create momentum for import and export HEPZA aims to lure 500 million USD in investment this year More capital flows come to economic, industrial parks in 2021 Businesses thirsty for labor at the end of the year Supporting policy response for small and medium enterprises in FTAs Việt Nam expects US$1.7 billion in tra fish exports in 2022 Textile firms urged to go green to attract more credit Việt Nam"s agricultural produce to China fully traceable Growing ‘stars in the midst of difficulties