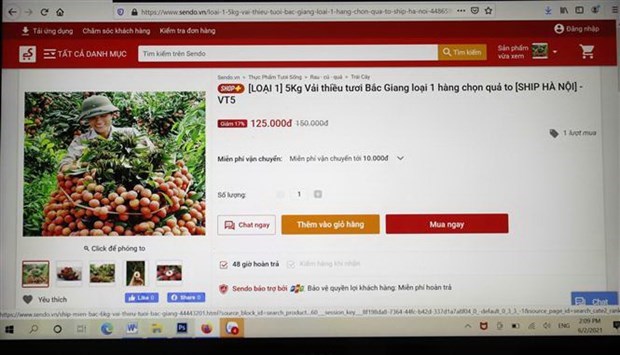 On an e-commerce site (Photo: VNA)

According to a study by Google, Vietnam’s digital economy is forecast to grow to 52 billion USD by 2025, an annual 29 percent increase from 2020, it said.

Startups backed by Warburg Pincus LLC and JD.com Inc., and regional players including Singapore’s Sea Ltd.’s Shopee and even Amazon.com Inc. are also targeting the country’s growing middle class. Between 2016 and the first half of 2020, investors funneled 1.9 billion USD into Vietnam’s online sector, a study by Google, Temasek and Bain showed.

“Vietnam is at the beginning of becoming a digitalised society with a young population that loves technology,” said Ralf Matthaes, Managing Director of Ho Chi Minh City-based Infocus Mekong Research. “So all these companies are tripping over themselves to offer these services.”

The Vietnamese government targeted that online shopping will account for 10 percent of Vietnam’s retail sales, and as much as 50 percent in Hanoi and Ho Chi Minh City by 2025. To create a more transparent modern economy, authorities want to increase cashless payment for public services and improve the regulatory framework for e-payment.

M-Service JSC, a Vietnamese startup that operates the MoMo payment app, in January raised more than 100 million USD from a group of investors including Warburg Pincus.

For the first time in their shopping lives, Vietnamese are being wooed with customer-first retail common in developed economies as dozens of e-commerce companies build loyalty among the nation’s growing middle class.

Tiki is the nation’s largest homegrown e-commerce site among dozens of local online shopping platforms, including some operated by retailers that have set up their own websites.

According to Crunchbase, investors including Sumitomo Corp. and JD.com have backed the startup with 192.5 million USD.

Henry Low, a former Amazon and Coupang Corp. executive, expressed his hope that there will be more funding rounds and plan for an eventual initial public offering.

With about two million orders a month, Tiki is deploying artificial intelligence and robots capable of moving 800kg of products to speed things along./.

Vietnam attracted nearly 14 billion USD in FDI in the first five months of this year, up 0.8 percent over the same period last year.

Indian firms to seek investment opportunities in Vietnam after COVID-19

Vietnam’s successful treatment of a United Nations employee who contracted COVID-19 has marked a new step of development in the cooperation between the two sides, while proving the country’s increasingly important role in the regional and international arena, UN Resident Coordinator in Vietnam Kamal Malhotra has said.