The State Bank of Vietnam (SBV) has extended the credit growth limits for the third time this year to some commercial banks to meet rising capital demands at year-end. 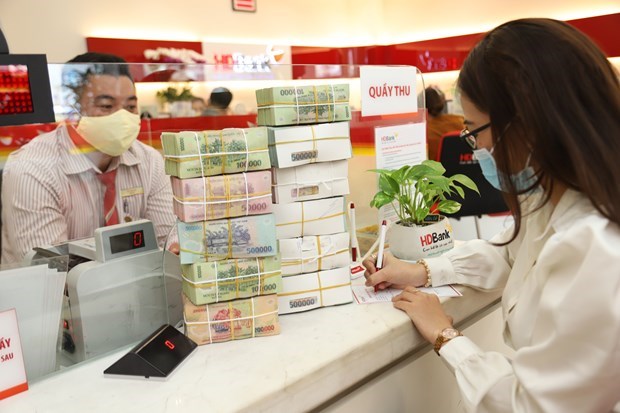 Eleven banks have been given permission to increase their credit growth limit this year (Photo: VNA)

The State Bank of Vietnam (SBV) has extended the credit growth limits for the third time this year to some commercial banks to meet rising capital demands at year-end.

According to a report from the Bank for Investment and Development of Vietnam’s Securities Company (BSC), 11 banks have been given permission to increase their credit growth limit.

TPBank has the highest rising rate of 6 percent, from 17.4 percent to 23.4 percent, thanks to its strong capital adequacy ratio (CAR) according to Basel II standards and perse investment portfolio.

In addition to TPBank, a number of other banks were allowed to expand their credit room by roughly 4-5 percent, including Techcombank (from 17.1 percent to 22.1 percent), MSB (from 16 percent to 22 percent) and MB (from 15 percent to 21 percent).

The SBV stated in its monetary policy management solutions for the last three months of the year that it will periodically assess and modify credit growth objectives for each bank based on its operational status, financial capacity and stability of credit expansion.

According to Nguyen Tuan Anh, head of the SBV’s Credit Department, credit growth rates were granted based on the particulars of each bank.

Moreover, banks that do not focus on hazardous and vulnerable businesses, with favourable interest rates are gaining the upper hand in terms of credit quota.

As a result, credit institutions that lower lending interest rates to support affected clients will be given priority consideration.

At the beginning of 2021, the SBV outlined three credit growth scenarios for the year.

The first scenario posits widespread COVID-19 vaccine coverage and the containment of the pandemic. This could see credit increases of 12-13 percent, perhaps even 14 percent.

In the second scenario, if the pandemic lasts until June, social distancing measures are still in place and vaccination rollout is prolonged, the rate could stand at 10-12 percent.

The third scenario suggests that credit growth could be at 7-8 percent if the pandemic lasts through the end of the year.

According to Anh, events so far are most similar to the third scenario as Vietnam suffers from the fourth outbreak of the COVID-19 pandemic.

However, credit growth in the first half of the year was far beyond the SBV’s expectation thanks to modest loan interest rates. As of June 21, the growth rate was 5.47 percent, considerably higher than the 2.45 percent over the same period last year.

The Asia Commercial Bank’s Securities Company forecast credit growth this year to be at 14 percent, equivalent to the highest rate in the best-case scenario, noting that it may even reach 15-20 percent among private banks.

ACB expects that credit demand will stay strong and credit growth will remain high in the second half of 2021, especially during the fourth quarter./.

While textiles is one of the key industries in Việt Nam with high export revenue, it is also among industries that pose a high environmental and social risk, according to Nguyễn Quốc Hùng, general secretary of Việt Nam Bankers Association.

Banks increased their charter capital by more than VNĐ110 quadrillion in 2021 - the highest annual growth to date - to enhance financial strength and meet the central bank’s regulations.

Credit institutions warn of a continuous increase in credit risks in the first half of 2022, according to a survey on credit trends by the State Bank of Vietnam’s Forecast and Statistics Department.