15th National Assembly’s third session to open on May 23

The third session of the 15th National Assembly will open on May 23 in Hanoi and last for 19 days, according to Vice Chairman of the NA Office Vu Minh Tuan. 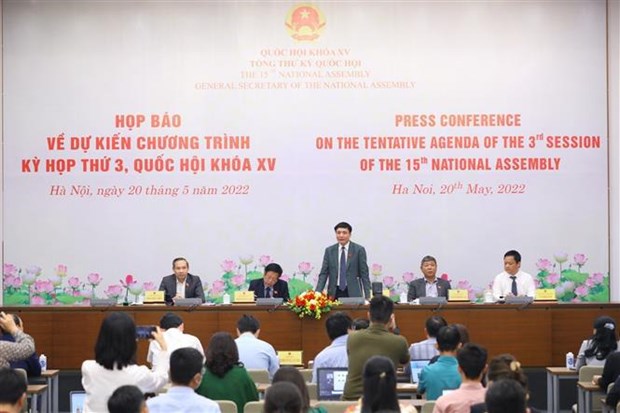 At the press conference (Photo: VNA)

The third session of the 15th National Assembly will open on May 23 in Hanoi and last for 19 days, according to Vice Chairman of the NA Office Vu Minh Tuan.

Tuan told a press conference in Hanoi on May 20 that the meeting is expected to debate and approve five draft laws and three draft resolutions, and look into six other bills.

Legislators will also spend time discussing socio-economic issues, the State budget and supervision, among others, including the NA’s supervision over the enforcement of policies and laws on planning since the Planning Law took effect.

The question and answer session will last for two and a half days, said NA Secretary General and Chairman of the NA Office Bui Van Cuong, adding that Deputy Prime Ministers, ministers and head of agencies will take the floor./.