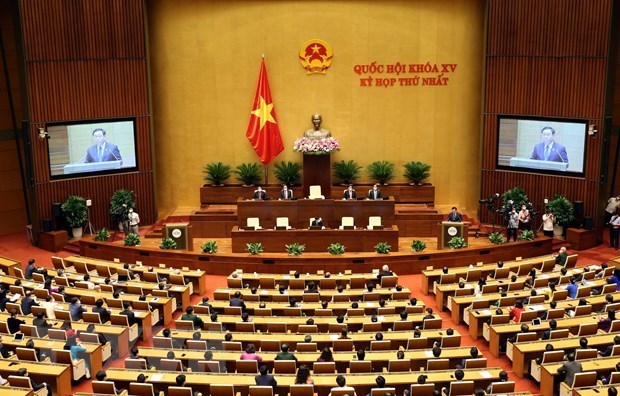 At the closing meeting of the 15th NA's first session. (Photo: VNA)

At the closing meeting, all 469 deputies present or 93.99 percent of total lawmakers voted to pass the session’s Resolution.

Speaking at the event, NA Chairman Vuong Dinh Hue said after nine consecutive days of working in a serious, democratic, solidarity, wise, and responsible manner, the legislature has successfully completed its agenda.

With high consensus, the NA approved and issued 29 resolutions, including 17 resolutions on organisation and personnel, 11 thematic resolutions, and one general resolution on the first session, promptly resolving immediate pressing issues and making decisions on important strategic and long-term ones.

It also ratified the appointment of Deputy PMs, ministers and other Cabinet members, and justices of the Supreme People’s Court, while approving a proposed list of Vice President and members of the National Defence and Security Council.

In addition, the lawmakers spent their time discussing and making decisions on plans for 2021 – 2025 regarding socio-economic development, national finance and public debt borrowing and payment, and middle-term public investment. They also decided on investment policy for the national target programmes on new-style rural development and on sustainable poverty reduction for the period.

The top legislator underscored that the first session delved into various important contents and took place amid complicated developments of the COVID-19 pandemic, especially in Ho Chi Minh City and southern localities with a risk of wide spreading.

Given such context, the NA has agreed to shorten the session’s duration by eight days compared to the plan, he said./.